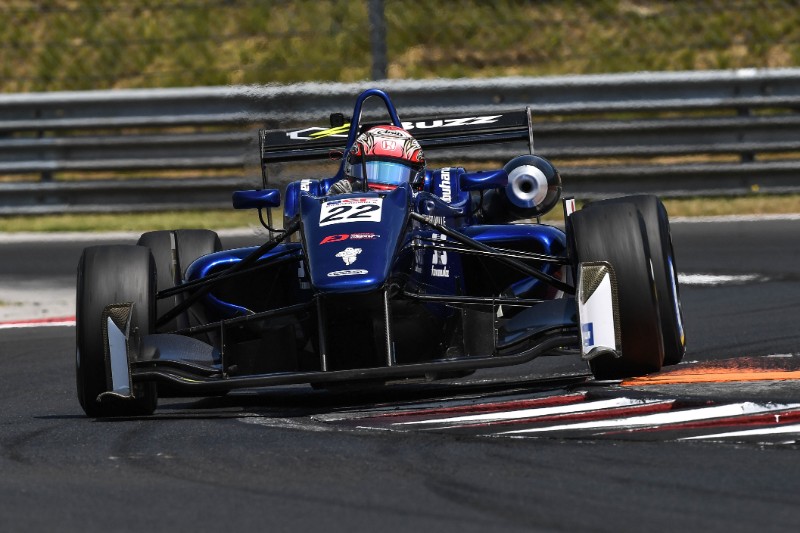 Carlin Formula 2 racer Nobuharu Matsushita was a non-classified finisher on his Euroformula Open championship debut in race one at the Hungaroring, crossing the finish line 10 laps down after using the race as a testing exercise.

The 25-year-old joined Carlin’s F3 squad to relearn the Hungarian circuit prior to his visit to it in F2 next month, but a compromised qualifying session led to a change of plan for the experienced Japanese racer, who won last weekend’s F2 feature race at the Red Bull Ring and unsurprisingly showed frontrunning EF Open pace.

“He was starting towards the back of the grid [16th] anyway. We hedged our bets, and wanted to maximise the opportunity for tomorrow [on tyre usage], so we used the race to test a few things.”

Matsushita peeled into the pits at the end of the formation lap, started a lap down from everyone else and returned to the pitlane on several occasions, often dotted between him setting fastest laps.

“He’s been racing in Super Formula [in 2018], so he’s a little rusty with European circuits,” Bonnor added.

“Unfortunately the Hungaroring is one of those circuits where you just can’t get to test on it. It’s really difficult.

“Really the only option for him was to come and do this weekend. Plus, it’s good fun. He loves to drive this Formula 3 car.”

Matsushita’s personal best lap in his debut race was almost a second-and-a-half faster than anyone else, and earned him a single point.

It marked Matsushita’s first race in the car since he won in a one-off race with Carlin in this year’s EF Open Winter Series, and prior to that when he secured the Japanse Formula 3 title at Fuji in 2014.

“We were waiting to see what would happen in qualifying and how it would pan out, we didn’t come here with a set plan,” said Bonnor.

“After qualifying, having to start at the back, it gave us an opportunity. It was bit of a no-brainer really [given the Hungaroring’s lack of overtaking]: Using the sessions to help him for tomorrow and to help the other guys as well.”

Although he has so far outpeformed them, having Matsushita in the EF Open line-up have proved to be a positive influence on the team’s four other drivers.

“He’s a really cool bloke,” added Bonnor. “He comes with a lot of experience and he’s happy to share his experience and help the other guys. That’s his natural character, he wants to help people anyway. So he’s a good guy to have on board, and he’s been useful.”

Carlin is the only team other than Motopark to have won in EF Open this year, thanks to Billy Monger’s Pau Grand Prix success.