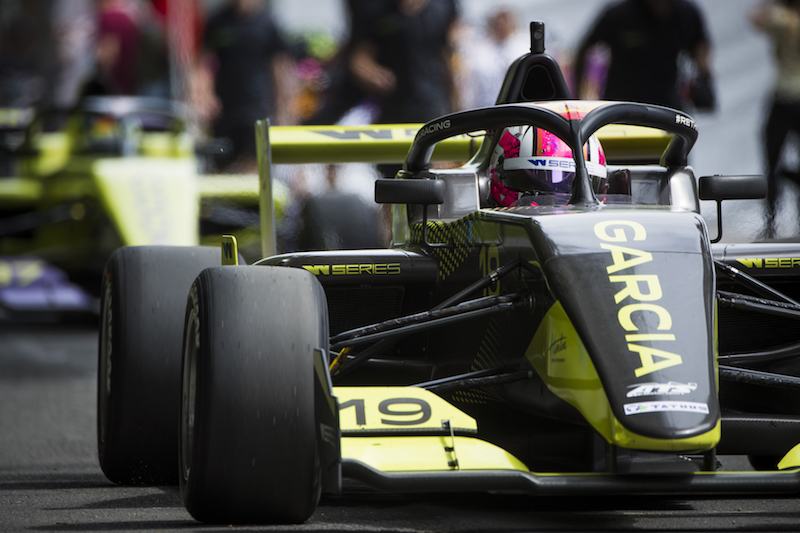 Marta Garcia claimed her first W Series victory in dominant fashion at the Norisring as Beitske Visser closed to within 10 points of championship leader Jamie Chadwick.

Garcia, at 18 the youngest driver in the field, converted her maiden pole position into the race lead at the start, controlling the race throughout to win by 3.619s from Visser.

Williams F1 development driver Chadwick got a slow start from the front row, losing out to the fast starting Visser but fending off Fabienne Wohlwend in a three way fight into the first corner.

Chadwick struggled for pace for most of the race, but finished 0.4s behind Visser after closing in on her title rival on the last lap, with Wohlwend finishing a further 2s behind in fourth.

Emma Kimilainen, who missed the previous two rounds due to injury, finished fifth on her return which involved a close battle for most of the race with Jessica Hawkins, the pair swapping positions several times.

Hawkins? car developed a problem with three minutes remaining which denied the British driver her first points finish.? Almost simultaneously Alice Powell, who started last on the grid following a gearbox issue in qualifying, retired with a fuel pump issue having made a strong recovery to eighth.

Italian Vicky Piria finished ninth but received a 10-second penalty that dropped her to 12th, with Porsche Carrera Cup GB driver Esmee Hawkey recovering from 15th on the grid to instead take ninth and Naomi Schiff claiming the final point in 10th.

Gosia Rdest, who topped Friday free practice, ran in sixth early on but an unscheduled stop for a front wing change and a subsequent drive-through penalty for speeding in the pitlane denied her a points finish.

Briton Sarah Moore was an early retirement with suspension failure shortly after colliding with Shea Holbrook at the first corner, the American suffering a puncture following the incident.