Home Featured Marta Garcia: “I had to improve” to get Norisring W Series win
NewsW Series 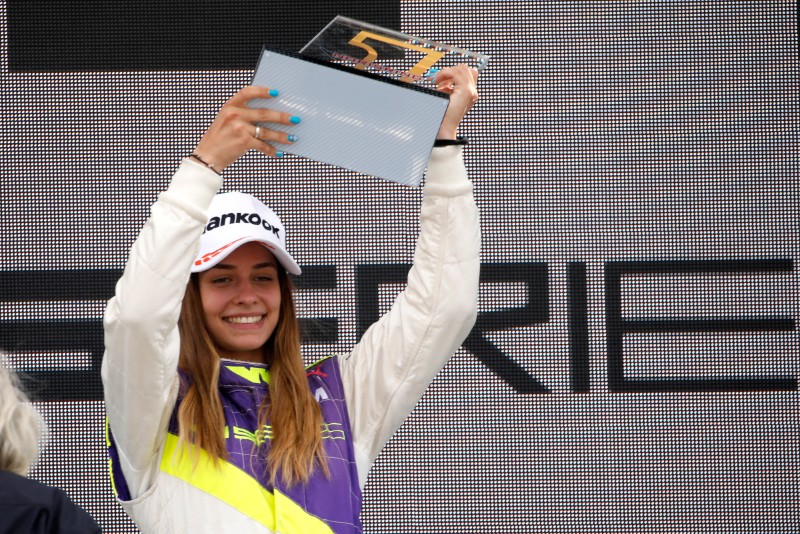 Marta Garcia was confident she could take her first single-seater win going into the Norisring W Series round this weekend, but had doubts after free practice.

The 18-year-old Spaniard was 13th and ninth fastest in the two Friday sessions on the German street circuit, closing a 0.756 second gap around the sub-minute lap to 0.379s in FP2. She then took pole on Saturday, and converted it into victory.

“Before coming here, before Friday, I expected it to be like this [success],” Garcia told Formula Scout after victory.

“But after yesterday, it was not a really good day actually because my positions were like P13 and P9. Even if the gap was not so big, I knew I had to improve some things.”

“I pushed myself to the hardest in qualifying today, and tried to hook up the lap and the things I had to improve on [from practice]. I thought I could do it. And I did a really good lap in qualifying.”

“In the race I had a really good start, which meant I could get away from the other girls. The race was just about keeping the rhythm, as the pace was good.

“It’s true that the car was working quite good. But also in the other races I had a good car as well, so it’s not like the car made a difference.”

Garcia pulled away nearly instantly, and only had her lead under threat when she encountered backmarkers to be lapped. Given it was her first experience of a street circuit and she didn’t need to overtake anybody while in the lead, it was a tense few moments.

“When I saw there was one girl coming out of the pitlane and she was going to annoy me, I was like: what’s going on here?

“I had to overtake her, and there was also another girl in the last laps but this one was better because she made a gap for me to go through. But I was feeling that ‘are they going to go out [of the way] or no?’. Because I couldn’t see any flags or anything like this. I really didn’t know what was going on.”

Garcia spent last season out of single-seater racing before the W Series provided the opportunity to return.

Having focused primarily on her education until the third round of the season at Misano, Garcia is now free to putting more of her attention towards her racing through the rest of the year. The first victory suggests this is already proving successful.

“I won in karting but I hadn’t won in single-seaters yet. [Winning] is something unique, and it feels so great when you do it for the first time, especially after the year of not racing [in 2018]. To have a victory in your first year [back], it feels really good.”