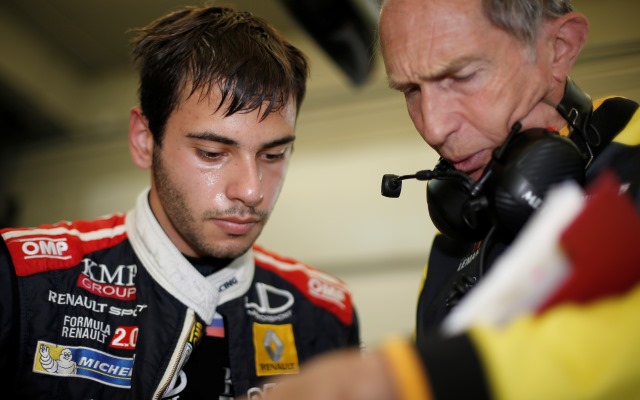 Formula Renault 2.0 graduate Matevos Isaakyan topped a test session for the second time since stepping up to Formula 3.5 V8, leading the afternoon running on the first day at Aragon.

The 17-year-old Russian traded places with Pons team-mate Yu Kanamaru?at the top of the timing screens with half an hour remaining, and ended up ahead with a time of 1m41.505.

That was three tenths quicker than the morning benchmark set by fellow rookie Ben Barnicoat, and remained good enough to end the day fastest.

Kevin Jorg made it a top-three lockout for FR2.0 graduates when he took third place for Lotus, within 0.074s of the pace.

He demoted Hughes’ Strakka Racing team-mate Callum Ilott, the 16-year-old ending his first day at a 3.5 test with the fourth best time.

Kanamaru ended up back in fifth ahead of Barnicoat, with Alfonso Celis seventh and Egor Orudzhev eighth.

Eurocup rivals Louis Deletraz and Jack Aitken fought over top spot with around an hour to go but ended up ninth and 11th respectively.

They were split at the chequered flag by a late lap from Ukyo Sasahara, running on his own for Comtec on his first day in 3.5.

There were three changes of driver for the afternoon session.

Tom Dillmann took over from rookie Thiago Vivacqua alongside Celis at AVF and was 14th after a technical issue limited him to eight laps, while Isaakyan’s SMP Racing colleagues Vladimir Atoev and Nikita Zlobin took over at Spirit of Race.