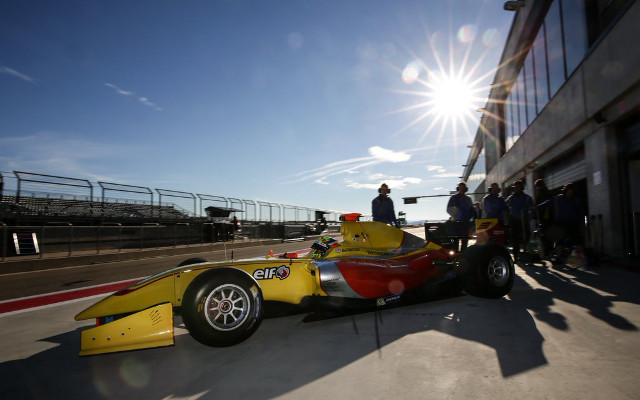 Ben Barnicoat set an impressive pace on the first morning of the Formula 3.5 V8 test at Aragon, leading Dean Stoneman in a one-two for the Carlin team.

Barnicoat is one of 10 Formula Renault 2.0 drivers testing on Wednesday at the invite of Renault Sport, the outgoing backers of the series.

The 18-year-old Briton, in only his second day driving the car having done the same rookie test 12 months ago, led large parts of the session and returned to the top with over half an hour remaining.

He was displaced by fellow FR2.0 racer Matevos Isaakyan inside the final 15 minutes but soon responded with two faster laps, ending up with a 1m41.822s.

Stoneman, testing for the team with which he made his GP2 debut last month, moved up into second before the end, exactly a tenth slower than Barnicoat, who is believed to be close to securing a Prema Formula 3 seat for 2016.

Ex-FR2.0 team-mates Kevin Jorg and Louis Deletraz claimed third and fourth before the end for Lotus and Fortec respectively, with Pons’ Isaakyan pushed down to fifth – with FR2.0 invitees taking four of the top five places.

Series runner-up Matthieu Vaxiviere was eighth for Spirit of Race ahead of Yu Kanamaru (Pons) and Egor Orudzhev (Arden).

Anthoine Hubert, Thiago Vivacqua and Asian FR2.0 champion Dan Wells were next up in their maiden 3.5 tests, with Eurocup champion Jack Aitken 15th for Arden and Ukyo Sasahara 17th for Comtec.