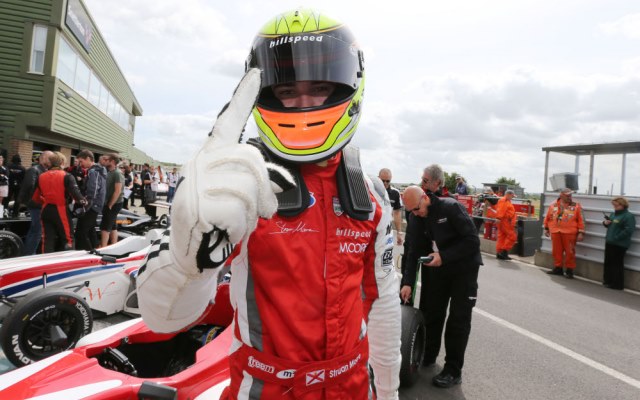 Struan Moore will be another driver returning to BRDC Formula 4 for the debut of its new car in the Autumn Trophy this weekend, reuniting with the Hillspeed team.

The 20-year-old from Jersey raced in the series in 2013 and 2014, finishing ninth and sixth respectively in the standings and taking one win each year.

He competed for Hillspeed from his car racing debut in Ginetta Juniors in 2011, through Formula Renault BARC in 2012 and into his maiden BRDC F4 campaign (pictured) before switching to Lanan Racing for his second.

This year he has raced in Japanese Formula 3 for KCMG, scoring a best finish of fourth.

?I?m delighted to return to Hillspeed for the Autumn Trophy,” said Moore.

“The team and I shared some great success and I?m really excited to get back into an F4 car after my season in Japanese F3.

“I?m hoping I can help Hillspeed develop the car and fight it out for the podium places, starting at Snetterton this weekend.?

Moore will partner Hillspeed’s 2015 BRDC F4 racer Ameya Vaidyanathan in the eight-race Autumn Trophy, in which the new Tatuus-Cosworth car will debut,

“We are absolutely delighted Struan is rejoining Hillspeed after a couple of years away from the team,” said team principal Richard Ollerenshaw.

“He?s a fantastic young driver and we built a great rapport and working relationship during our three years together across Ginettas, Renault and BRDC F4.

“The experience he?s gained this year in Japanese F3 will prove incredibly important with the advent of the new F4 car and his return to the team is going to help Ameya develop even further.

“We?re all thrilled to have such a strong line-up for the Autumn Trophy and cannot wait for the first round.?

The announcement of Moore’s return follows the news that his former rival Sennan Fielding will make a comeback with the HHC team for the Autumn Trophy.