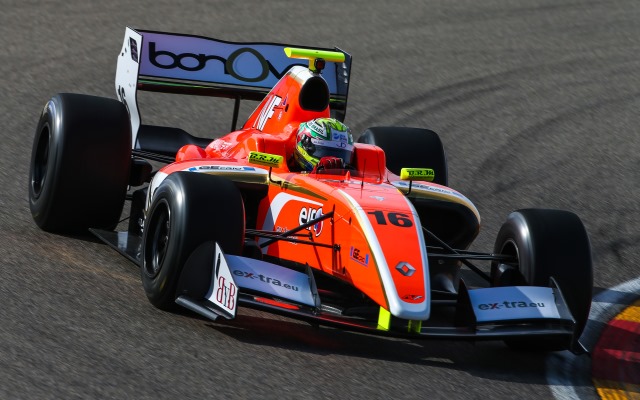 Single-seater veteran Tom Dillmann recovered from a late off to top the morning session on day two of the Formula 3.5 V8 test at Aragon ahead of leading rookie Jake Hughes.

Joining AVF for the test alongside the team’s renewed signing Alfonso Celis, Dillmann had just beaten his team-mate’s time to go quickest when he went off in the gravel at Turn 12, triggering the last of several red flags with just over half an hour remaining.

In his absence after the restart, Celis and Hughes took turns at the top of the times before Dillmann returned to the track and moved half a second clear.

The 26-year-old found further time on his next lap to become the first driver this week to go under the 1m41s mark, setting a time of 1m40.941s.

That was 0.607s ahead of Hughes, with Celis the last driver within a second of Dillmann in third.

Kevin Jorg took fourth at the end from Jack Aitken having rejoined the Arden team in place of the Briton, who instead teamed up with his former FR2.0 team-mate Hughes at Strakka for the first time.

Two-time 2015 race-winner Egor Orudzhev was sixth in the other Arden car ahead of Daniel De Jong, driving for Lotus in his first time in a car since he broke a vertebra in a big GP2 crash at Spa in August.

Yu Kanamaru finished up eighth for Pons after stopping on track in the closing stages, ahead of Fortec tester Louis Deletraz and Formula 4 graduate Vladimir Atoev for the new Spirit of Race team.

39-year-old Guillaume Cunnington, a Japanese F3 competitor this year, is driving the second Lotus car. He previously tested for Tech 1 12 months ago after winning the Masters class in Asian Formula Renault.

Neither Carlin or Comtec fielded cars during the morning, which combined new teams Teo Martin Motorsport and RP Motorsport not yet showing up, reduced the field to 16.