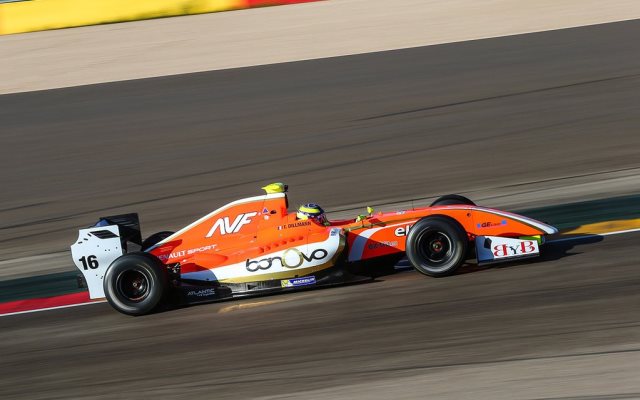 Tom Dillmann stayed on top in the afternoon session on day two of the Formula 3.5 V8 test at Aragon after another rapid turn of pace for the AVF team.

The 26-year-old, who raced for Carlin this year, came out second best in a battle with two-time 2015 race-winner Egor Orudzhev over top spot in the middle of the final hour before his team-mate Alfonso Celis then took a turn out front.

Eurocup Formula Renault 2.0 champion Jack Aitken went one thousandth of a second faster than the Mexican with six minutes left on the clock but he was immediately bettered by Dillmann by one tenth.

The Frenchman then made three more consecutive improvements to end up on a 1m40.728s, two tenths faster than his morning time.

He was again the only driver below the 1m41s mark with Orudzhev 0.373s back in second place.

Aitken improved his time before the end but was ultimately beaten to third place by his fellow Strakka Racing tester and FR2.0 team-mate Jake Hughes, just 0.02s separating the Britons.

Celis was fifth ahead of another pair of compatriots and FR2.0 team-mates, Swiss duo Louis Deletraz (Fortec) and Kevin Jorg (Arden).

Tech 1 racer Aurelien Panis was eighth in front of Daniel De Jong, making his return from injury by testing with Lotus, and Yu Kanamaru of Pons.