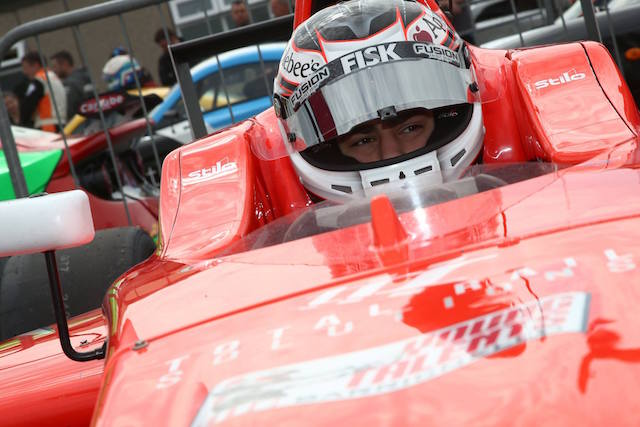 From pole, Australian driver Goddard kept the lead ahead of Martins and was able to build a gap of eight tenths as the Brazilian defended from behind.

His race would end on lap four though?when he clipped the tyre stack on the final apex of the Knickerbrook chicane, sending him off into the gravel trap.

Martins was gifted the lead but he had to spend the rest of the race defending from Pull and the long queue that began to form behind.

Carlin driver Pull got closest when he pulled alongside the Arden car into the first corner Old Hall for the final time, but the Brazilian managed to hold on to win by 0.130 seconds.

Max Fewtrell got a run on team-mate Pull when the second-placed driver was blocked by Martins on the final lap, but he was then attacked into the Island hairpin by another of the Carlin quartet, Petru Florescu,?who came down the inside of both Fewtrell and Alex Quinn at the same time.

Billy Monger took sixth from ninth on the grid, ahead of race one winner?Devlin DeFrancesco. The off-form duo?Luis Leeds and?Sennan Fielding?were next, while?Jack Martin took 10th just 3.5s behind team-mate Martins at the line.

Race one podium finisher?Jamie Caroline slowed on the opening lap and retired to the pits.