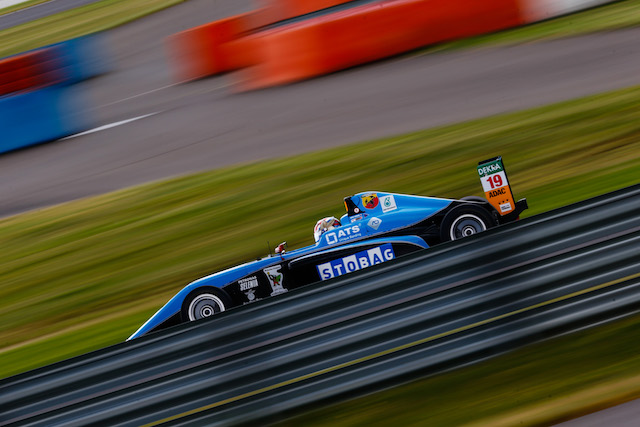 ADAC Formula 4 rookie?Fabio?Scherer?claimed a surprise first victory in the final race at the Lausitzring, charging through on slicks on a drying track.

The Jenzer?driver, who started 14th and dropped as low as 27th in the wetter early?stages, took the lead away from?Mike Ortmann with less than a minute left on the clock.

Although the track was no worse than?damp in most places, the race began behind the safety car and that was extended when Marilyn Niederhauser – who had been eliminated in the qualifying race but permitted to start the finale after several withdrawals following?a bruising Saturday – spun and then drove off track into a gravel trap as she attempted to recover.

The pack was?eventually released?at the end of lap three, when Ortmann passed reverse-grid polesitter Leonard Hoogenboom for the lead.

Within a few laps, Joey Mawson had worked his way from fifth to second ahead of?Kim Luis Schramm?and?Mick Schumacher, starting 10th after winning the first two races of the weekend.

Schramm repassed Mawson for second just before the safety car returned to recover the car of?Oliver Soderstrom that the Swede has lost control off over a particularly wet patch where the track returns to the infield at the end of the back straight.

After the restart, Mawson would be passed by Schumacher and a number of others before being forced to pit with a deranged front wing.

Schumacher however would spin away that third place to?Thomas Preining?on lap 14, and dropped several places on the next lap including to the charging Scherer, who on the following tour climbed to third ahead of?Lirim Zendeli, who had in turn worked his way up from 18th on the grid.

Just a lap later Scherer would take the led away from Ortmann, and he opened up a three-second lead on the final tour.

Taking second, and also on slicks, was?Jannes Fittje. Having started seventh he also slipped towards the back early on, but had remained ahead of Scherer as the pair charged forward until the had to deal with the traffic that included Schumacher, when Scherer nipped ahead.

Ortmann finished third ahead of Schramm and Zendeli, while Schumacher ended up sixth, leaving him just three points now behind Mawson.

Sophia Floersch‘s chances of points ended when she tagged Fittje while trying to hold off van Uitert into Turn 1, damaging her front wing.