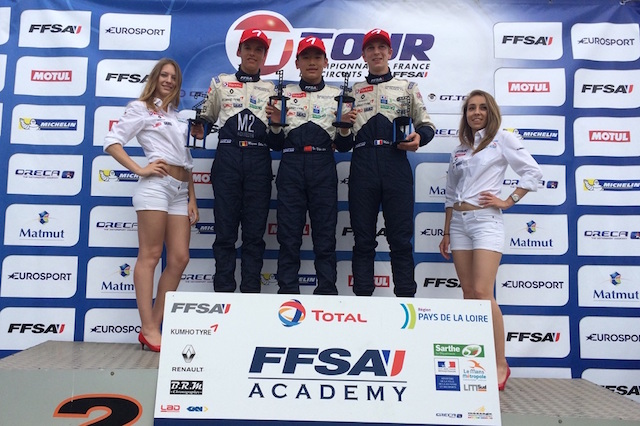 Chinese?driver Yifei Ye claimed his second clean sweep of French Formula 4 victories in the third round of the season at Ledenon.

The second-year driver, who also won all four races at the season-opening Paul Ricard event, won the first race after a battle with?Gille Magnus, having lost out to the Belgian at the start.

Jean-Baptiste Mela was a similar distance back in third for his first podium of the season, following an early pass on?Pierre-Alexandre Jean.

Michael Benyahia took fifth, while?Hugo Chavalier?had been sixth?before serving a drive-through penalty for abusing track limits with a lap to go. That promoted?Theo Coicaud to fifth at the line, but he?had 30 seconds added to his time for the same offence and?Javier Cobian eventually took sixth.

Ye had to come from 10th on the reverse grid to win race two, and looked destined to settle for?second before Aleks Karkosik?spun away a 3.4s race-long lead on the penultimate lap.

Benyahia came through from sixth to second ahead of?Tristan Charpentier, who had spent much of the race in second place. Magnus went from ninth to fourth, while?Jose Sierra and Chevalier climbed from the sixth row to complete the top six. They benefited from a clash between?Arthur?Rougier?and?Enzo Samon when fighting over third that triggered a safety car.

Ye led race three from the front, pulling out an 8.7s margin over Mela, who kept Magnus behind throughout for second place.

Jean also remained in fourth for the duration, while Benyahia and Coicaud took fifth and sixth.

Ye was on pole again for the finale, with the grid set by race three results. His attempts to pull another large gap were thwarted by a safety car, but he finished up just under three seconds clear.

Jean slipped from fourth to sixth at the start but produced a recovery and more to take second ahead of Magnus.

Mela spent much of the race in third but was tagged by Cobian on the last lap, falling back to eighth, while the Spaniard was relegated to the back for unsporting behaviour. Benyahia took fifth in front of Chevalier.