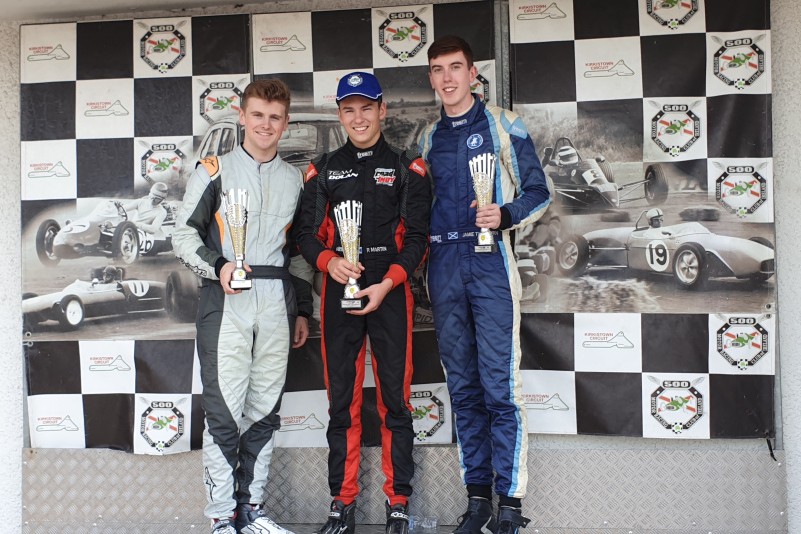 A fast-starting Clarke was up to third place by the end of the first lap, passing team-mate Browne, and shortly thereafter both dispatched race one winner and poleman Michael Eastwell.

Eastwell had been put on the back foot by Martin, who slipstreamed by exiting the hairpin and had taken the lead before reaching the first sweeping left-hander.

At the halfway point the CDR drivers swapped places, a good exit off the hairpin allowing Browne to slip past Clarke heading down to the first turn, but both remained glued to Team Dolan’s Martin.

Persistent pressure from both culminated on the final lap, as Martin braked early on the inside of Colonial and caught out Clarke at the back of the queue. Clarke moved left in an attempt to avoid hitting his team-mate but clipped Browne?s rear-left wheel, causing Clarke to spin off and out of the race.

Though Browne was able to continue on unhindered after the contact he was unable to make a last-lap move on Martin work, the final margin of victory a slim 0.103 seconds.

Jamie Thorburn took his first podium of the season, and Border Reivers?s first ever, having also got past Kevin Mills Racing’s Eastwell in the same manner as Martin and the CDR drivers had before him.

He came under pressure from a fast-starting Alan Davidson, whose Mondiale M89S was the only pre-’93 car in the field.

Davidson retired in race one with a broken battery and lined up 11th for race two, but was up to sixth within a lap. A?move on Thorburn late in the race for what was at that point fourth place went awry, spinning him out and dropping to ninth ? which became eighth after Clarke?s retirement.

Ivor McCullough was another Kirkistown regular scything his way through the National field. He started last on the grid but finished with a top five, triumphing in a long battle with CDR?s title contender Spike Kohlbecker.

Will Herron finished seventh, ahead of the recovering Davidson, Dolan?s Morgan Quinn and KMR?s Michael Macpherson,

Martin’s team-mate Jamie Sharp?s hopes of a top 10 finish were ended when he overshot the hairpin on the first lap, while the sole B-M Racing car of Rory Smith was halted by a master cylinder issue early on.