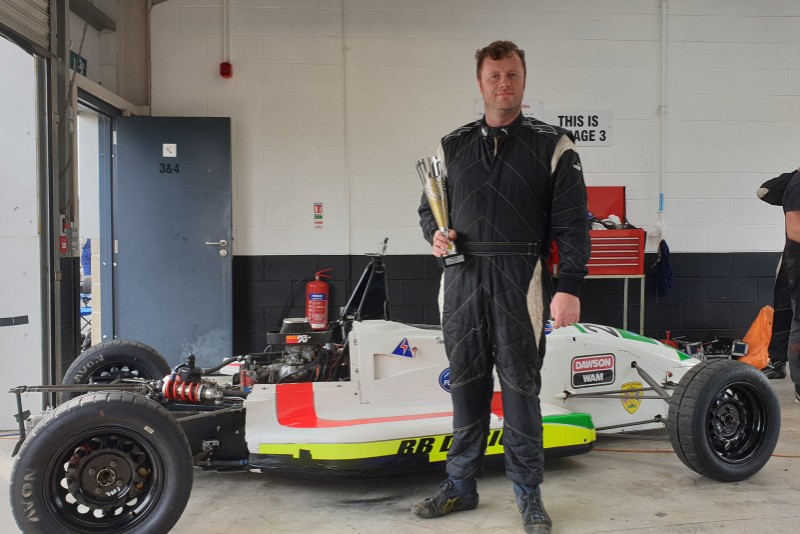 Ivor McCullough upstaged the BRSCC National Formula Ford 1600 regulars in the final race at Kirkistown, with closest rival Ross Martin slowed by contact with Rory Smith on the last lap.

A few laps later McCullough pounced for the lead, passing Spike Kohlbecker at the hairpin.

Race two winner Martin was on a charge from seventh place, and was up to third before the halfway mark of the 16-lap race.

Martin then took Kohlbecker for second place at Colonial at the halfway mark, which also allowed Kohlbecker?s Cliff Dempsey Racing team-mate Jonathan Browne through to third.

McCullough was able to cover off Martin?s attacks, meaning the latter ended up coming under pressure from Smith, who had started last on the grid.

Smith had passed CDR pair Kohlbecker and Browne on consecutive laps and got into Martin?s tow on the pit straight as the last lap began. The two came into contact, the front nose of Smith?s Medina chassis partially caved in and Martin?s Van Diemen picking up gearbox damage.

Their coming together allowed Kohlbecker to move back into second at the finish ahead of Browne, with Smith finishing fourth and Martin coasting to the finish in seventh, unable to find a gear.

Jamie Thorburn completed the top five, capping his best weekend of the season since returning part-way through the year. Despite a poor start, he was still able to pass poleman Will Herron, whose own poor start dropped him all way the way to eighth by lap one.

Thorburn also went wheel-to-wheel with James Clarke early on, whose quick start had moved him from 14th to seventh.

Clarke?s side-by-side attempt at Colonial failed to pay off, giving Herron a run on the inside into Fishermans, but the two made contact and Clarke sustained a broken right-rear wishbone in the clash. Herron went on to finish sixth, half a second behind Thorburn.

Alan Davidson had made another great start to pick up fourth place from eighth on the grid, but dropped out early with more mechanical issues.