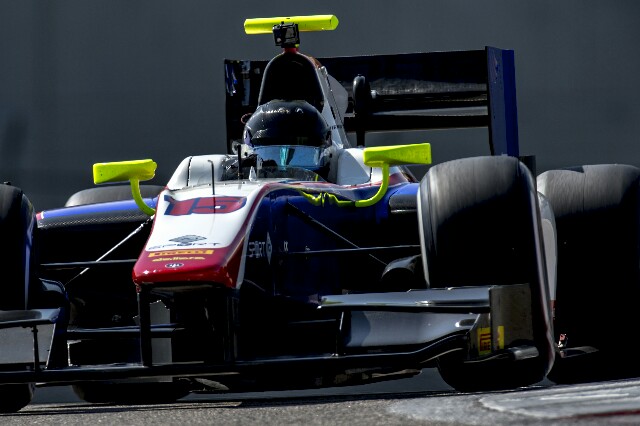 Raffaele Marciello posted the best time on the opening day of GP2 post-season testing in Abu Dhabi as he rejoined his 2015 team Trident.

The former Ferrari protege and European Formula 3 champion topped an afternoon session that was cut short by a red flag for the stopped car of Artem Markelov, the Italian’s 2016 Russian Time team-mate.

Marciello recorded a best time of 1m48.937s, bettering the 1m49.483s of morning pacesetter Nobuharu Matsushita. He had been second to the Japanese driver in the morning, 0.284 seconds off the pace.

Matsushita, who will hand over his car to new Prema F3 signing Callum Ilott for the remaining two days, lowered his time to a 1m49.107s to end the day second ahead of Oliver Rowland, who has joined DAMS for all three days of the test.

Remaining with the French team, Nicholas Latifi was fourth, with his time matched to the thousandth by Rapax veteran Johnny Cecotto.

In sixth in the afternoon was new GP3 champion Charles Leclerc, the top rookie on his first day in a GP2 car for Prema, whose two cars were painted all-red to reflect it’s Ferrari partnership for 2017.

Team-mate Antonio Fuoco was top rookie in 12th in the morning but had an eventful afternoon that involved contact with Carlin Indy Lights racer Felix Serralles.

Alex Palou was a close second to Fuoco among the newcomers in the opening session for Campos, but will cede his seat to compatriot Daniel Juncadella on Thursday.

Russian Time’s Jordan King and Markelov completed the top eight in front of Luca Ghiotto at Rapax and Sean Gelael at Arden.

Gelael just outpaced his friend and 2016 runner-up Antonio Giovinazzi in the other Arden car, which will now be driven by Ghiotto for the rest of the test.

GP3 graduate Nyck de Vries will take Ghiotto’s place at Rapax, having returned from his maiden DTM outing with Audi at Jerez.

Markelov and King were in the top four in the morning in front of Cecotto, Rowland, Ghiotto, Gelael and Latifi. Gustav Malja edged out Racing Engineering team-mate Louis Deletraz for 10th.