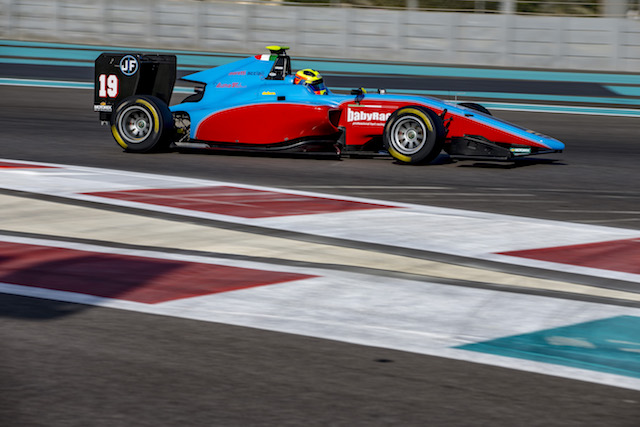 Ex-Formula 3 racers?Alessio Lorandi and?Niko Kari topped a session each on day two of the GP3 post-season test in Abu Dhabi.

Remaining with the Jenzer Motorsport team with which he contested the final two rounds of the season, Lorandi posted the day’s best time after a restart with less than 10 minutes remaining.

His time of 1m55.734s was eight hundredths of a second faster than Santino Ferrucci, who moved from his 2016 team DAMS to Trident for the second day of the test.

Finnish Red Bull Junior Kari had led the morning session with a 1m55.949s ahead of ART tester?Jack Aitken and Lorandi.

Anthoine Hubert ended his first day in GP3 machinery in?fifth for ART, having been seventh in the morning behind?Matheus Leist (Trident),?Arjun Maini (ART) and Schothorst.

On the third and final day, Leist will try a third different team in ART – joining?George Russell, Hubert and Maini – while Aitken heads to DAMS.