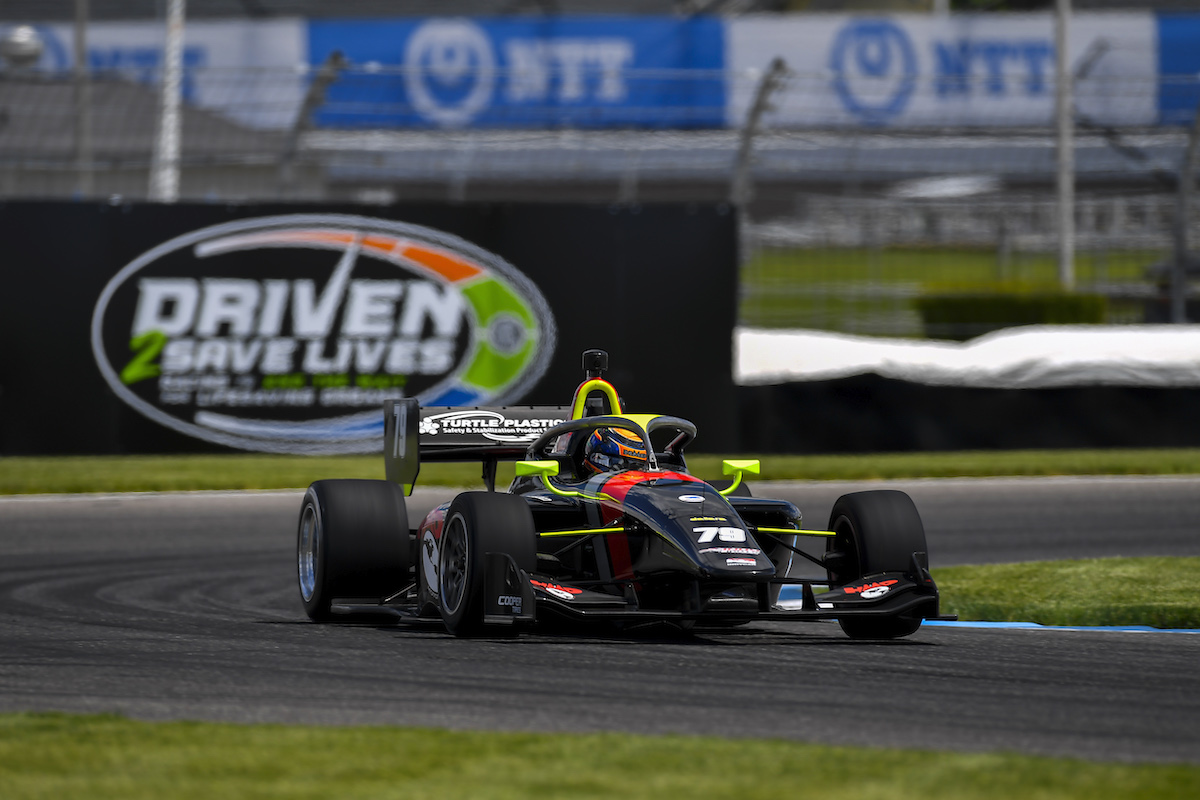 David Malukas regained the Indy Lights series lead after taking his third win of the season at the Indianapolis road course in a close finish with Toby Sowery.

HMD Motorsports’ Malukas started on pole for the final Road to Indy race of the weekend and led the field at the start ahead of Global Racing Group with HMD’s Linus Lundqvist.

Juncos Racing’s Sowery got past Lundqvist on the second lap of 35 but was unable to make a significant dent into Malukas’s lead until the end.

Sowery tried into the first corner of the last lap but was unable to make his way past, and also had a good run off the final corner to draw alongside but came up just short.

But Malukas was unfazed out front, held off by three-hundredths of a second, and managed to add to his wins at Barber and St. Petersburg to take the championship lead from Lundqvist.

Carlin’s Alex Peroni took his first Lights podium with third, after forcing Lundqvist into a mistake early on.

Andretti Autosport’s Kyle Kirkwood was also a beneficiary of now-former championship leader Lundqvist’s error but could not climb any higher than fourth despite being the quickest car on track for much of the middle of the race.

Lundqvist took fifth ahead of Andretti Steinbrenner Autosport’s Devlin DeFrancesco, with the pair battling late in the race, and the remaining two Andretti entries of Robert Megennis and Danial Frost, who swapped positions on both the penultimate and final laps.

GRG with HMD’s Benjamin Pedersen ended the race in ninth ahead of reigning Indy Pro 2000 champion Sting Ray Robb, who consistently lost positions throughout the early portion of the race.

Pserra Racing’s Antonio Serravalle, Carlin’s Christian Bogle and HMD Motorsports’ Nikita Lastochkin were the remaining runners, and all 13 entries were circulating at the conclusion.