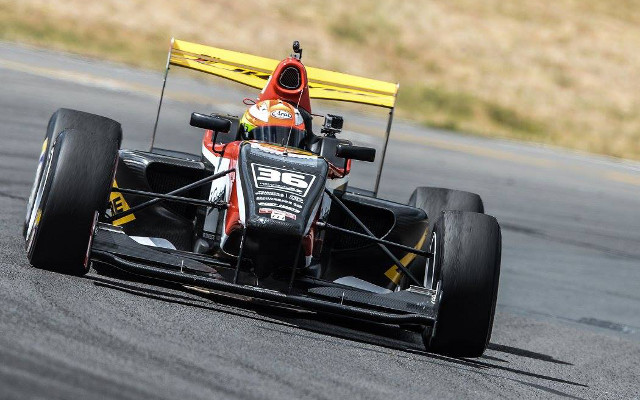 Arjun Maini boosted his Toyota Racing Series title hopes with his second win of the campaign in the first race of the Taupo quadruple header.

The Indian was pressed hard for much of the race – either side of a red flag stoppage to recover?Matteo Ferrer‘s car – by single-seater newcomer Callum Ilott, who had started alongside the Indian on the front row of the grid.

But an error from the European karting champion would lead to contact with Charlie Eastwood that forced the latter out of the race and triggered a second pause in the action.

Artem Markelov got past into second, but after the restart the GP2 racer had contact with Ilott that ended the Briton’s promising run and dropped the Russian to the back of the pack.

Sam MacLeod – whose European F3 ride with Motopark was announced this week – benefited to claim P2 behind Maini, with Santino Ferrucci getting his fourth podium from five races.

Championship leader Lance Stroll had a quiet race but benefited from the chaos ahead to climb from eighth to fourth by the finish. Maini has gained 21 points on the Canadian, cutting his margin to 34 with six races to go.

Thomas Randle took fifth after passing impressive debutant Sergio Sette Camara?who ended up losing just one place from his P5 grid slot. The Brazilian has taken over from Dhzon Simonyan at Giles for the final two rounds and is already just ten points short of the 55 scored by his predecessor.

UPDATE: A post-race investigation has determined that Arjun Maini and Nikita Mazepin made false starts. Both have picked up ten-second penalties and are demoted to 12th and 13th respectively. Sam MacLeod inherits the victory.