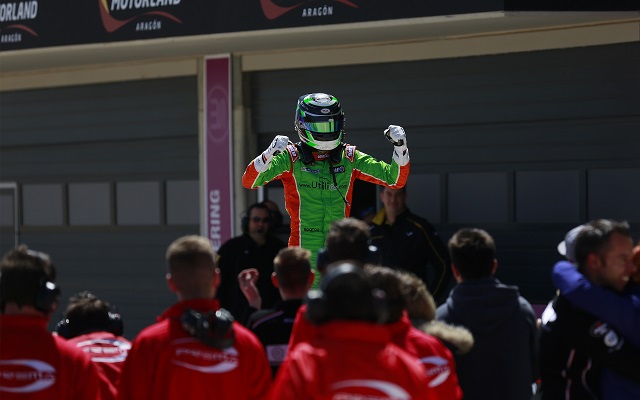 Andrea Pizzitola produced a lights-to-flag drive to secure his first ever win in the Eurocup Formula Renault 2.0 in race two at Aragon.

Pizzitola had secured his second pole position in this category earlier in the day and then proceeded to convert that into a long-awaited maiden victory with an assured drive.

The Frenchman managed a solid getaway from the line and headed front row starter Kevin Jorg into turn one. The Swiss Josef Kaufmann Racing man gave Pizzitola a run for his money in the early stages of the race, but couldn’t find a place for an overtake and would ease off, cruising to second place.

Bruno Bonifacio managed to secure his second third-place finish of the opening weekend after re-taking the final podium spot back from Nyck de Vries. The Brazilian originally out-braked himself to let the Koiranen man through, but de Vries made a similar mistake later on in the race, restoring the status quo.

After starting from 12th on the grid, Levin Amweg of the ART Junior Team will be delighted to come home in fifth, with rookies Simon Gachet, Anthoine Hubert and Dennis Olsen all collecting solid points in sixth, seventh and eighth respectively.

The trio benefited from a hectic race ahead, which largely centered around KTR man Alex Albon. Midway through the race, after being overtaken by Egor Orudzhev off the track, the Lotus man clipped the Russian while trying to re-take the position, consequently ending the Tech 1 driver’s race with a puncture and damaging his own front wing.

Orudzhev had been the fastest man on the track at that point but was prevented from adding to yesterday?s second-place finish. With the carnage out front, JKR?s Gustav Malja finished in the last points-paying place to complete a positive weekend for him.

There was a difficult start for ART Junior Team as their drivers Aurelien Panis and Callan O?Keeffe collided early on, ending each other’s races. Meanwhile, prior to that, Matt Parry?s race came to a premature conclusion as he was spun off by JD Motorsport?s Denis Korneev.

Nyck de Vries leads the championship after the first weekend of the season with 37 points. Bonifacio is seven points behind, while Pizzitola rounds out the top three with 25 points.