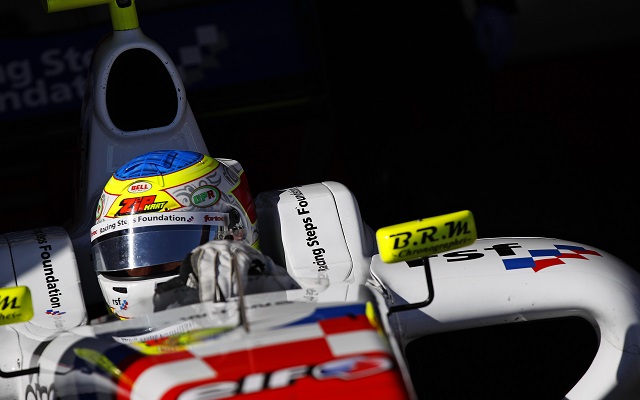 The Racing Steps Foundation protege managed a nice getaway off the line and never seemed in danger of losing his maiden win afterwards.

While Rowland’s win was calm and collected, the race going on behind him was anything but, as the remaining podium positions finishers were an uncertainty until the very checkered flag.

While Pietro Fantin managed to keep second at the start and held it until the wave of mandatory pit stops, even managing to rejoin right in front of Arden’s Pierre Gasly, he soon began tumbling down the field and eventually found himself outside the top ten.

Instead, it was Will Stevens who assumed second after the stops, leading Red Bull duo of Gasly and Carlos Sainz, with the latter having managed to move up to provisional fourth due to a well-timed stop, despite a less-than-perfect start to the race.

Gasly appeared to have the pace on Stevens and tried to make the move on lap ten, only to run wide and let Sainz through.

While Rowland successfully made his stop and continued to pull away out front, setting fastest laps along the way, the trio behind him ran in formation for several laps – with neither Sainz nor Gasly quite ready to attempt an overtake.

On lap 22, Sainz was caught out by Stevens’ braking and locked up his tyres, running way wide and letting Gasly through. The Frenchman then ramped up the pressure on Stevens and the pair went into the final lap side-by-side.

As the Fortec man out front crossed the line to take his first win, Gasly took the inside line into turn 16 and picked up second. With Stevens compromising his line in an attempt to defend, Sainz briefly got alongside the Strakka man, but it was the Caterham junior who prevailed in the dash to the line, securing the final podium spot.

A smart late-stop strategy allowed AVF’s Zoel Amberg to rejoin in fifth and the Swiss driver brought the car home in that very position. Roberto Merhi held on to sixth, while Marco Sorensen picked up his team’s first points of the year in seventh.

Another late-stopper – Lotus man Matthieu Vaxiviere – notched another point-scoring finish at Motorland with a spirited drive to eighth. Jazeman Jaafar and Norman Nato rounded out the top ten.

The race was not to be without incident, which became evident early on when Luca Ghiotto stalled on the grid and was collected by Nikolay Martsenko, who, to his credit, managed to avoid a bigger incident and then pulled off with damage to his suspension.

Later on, Marlon Stockinger punted Will Buller off the track on his outlap, with both retiring shortly thereafter. Finally, a solid race for Sergey Sirotkin was undone due to suspension damage, which forced him to pull over on lap 20.

Sainz heads the 3.5 championship, leaving Aragon with 62 points. His nearest rivals Rowland, Gasly and Stevens are at 49, 45 and 40 respectively.