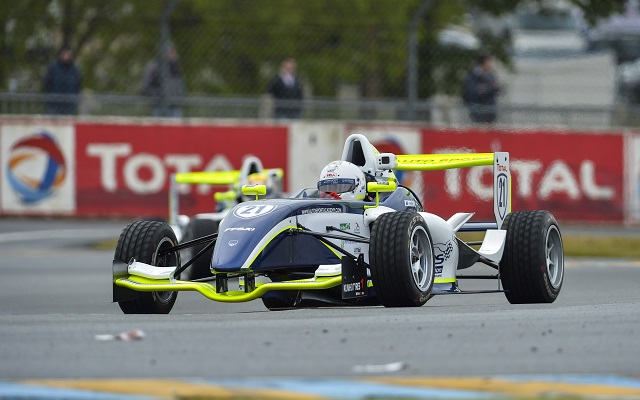 Australian race Joseph Mawson took a commanding victory in the final race of French F4’s opening round at Le Mans.

Starting from second, Mawson dropped down to fifth off the line, failing to get traction on the wet track. However, having managed several fantastic overtakes in the second half of the race, the 18-year-old karting graduate saw the checkered flag first.

The beginning of the race saw a great duel between polesitter Felix Hirsiger and Lasse Sorensen, the latter taking the lead on lap three with a pass into turn two.

Meanwhile, Lotus F1 junior Dorian Boccolacci settled into third, having improved seven places from his grid position between the start and the first corner of the race.

When Sorensen overtook Hirsiger and began pulling away at a rapid rate, Mawson, then fourth, finally commenced his charge. He first deposed Boccolacci with a great dummy overtake and then went around Hirsiger into turn one to assume second.

The Australian then reeled in the race leader, before passing the Dane round the outside in the closing stages of the race.

With Sorensen and Hirsiger completing the podium, Boccolacci had to settle for fourth. Series returnee Amaury Richard finished fifth, while Russian duo of Denis Bulatov and Vladimir Atoev followed suit in sixth and seventh.

The top ten was completed by Paul Hokfelt, Bryan Elpitiya and Valentin Hasse-Clot.