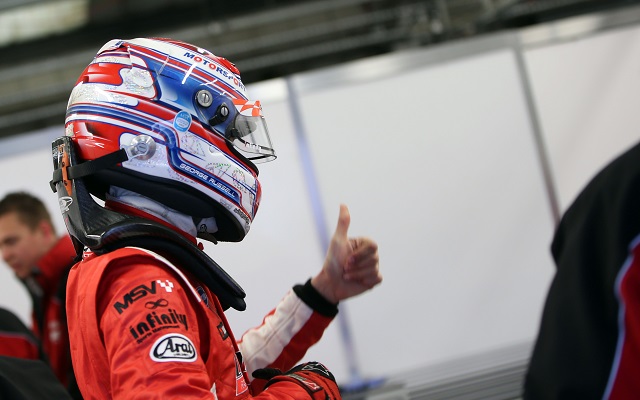 Russell started the reverse-grid race in P4, with Lanan teammate Arjun Maini holding pole ahead of Will Palmer and Gustavo Lima.

The Indian held on to the lead off the line, but was overtaken for first by Lima during the course of a hectic opening lap, as Russell stayed in fourth.

The British karting graduate then fought his way up to second on lap two, before stealing the lead off of Lima on lap three.

The rest proved a relaxing Sunday drive for Russell, who pulled away from the opposition with every lap as his rivals were preoccupied with fighting for second.

As a number of cars lined up behind Lima with the hopes of being the one to take second, the Brazilian managed to hold station for several laps, before finally surrendering the place to ADAC Formel Masters graduate Nicolas Beer on lap seven.

On that very same lap, Struan Moore, who started the race in dead last, also made his way through Lima to take third and began putting pressure on Beer.

However, four seconds behind dominant race winner Russell, it was Beer who held on to second, with Moore rounding out the podium. Race one winner Raoul Hyman overtook Lima for fourth, with the Brazilian settling for fifth place.