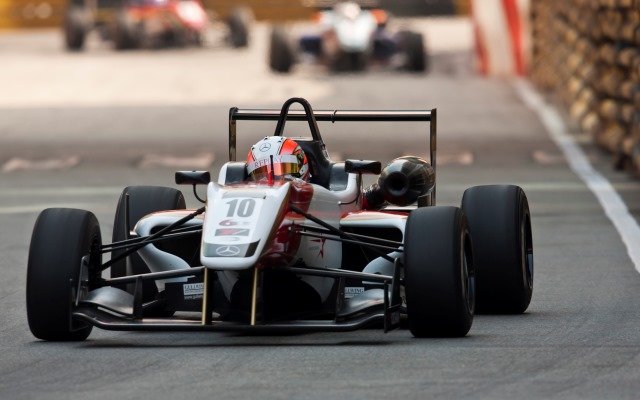 Alex Lynn led from start to finish as he secured the biggest win of his career in the Macau Grand Prix.

Starting on pole after his victory in the qualifying race, Lynn kept the lead as?Pipo Derani came from fifth on the grid to challenge for the lead on the outside of Mandarin. The Brazilian settled into second as?a collision at the back between out the safety car, with John Bryant-Meisner, Lucas Auer and Sean Gelael all in the wall. After starting second, Felix Rosenqvist also retired after contact on the high-speed stretch.

Lynn made a good restart to put a gap between himself and Derani, who was then passed by Antonio Felix da Costa at Lisboa.

Lynn opened up his lead to more than two seconds within a few laps, but Felix da Costa did manage to bring the gap back down with Raffaele Marciello in tow after the European Champion managed to pass Derani at Lisboa at the third time of asking with a smart move down the inside. The Ferrari ace would push too hard though, crashing heavily at the final corner and ending his race.

Lynn’s advantage over Felix da Costa came down to 1.3 seconds under the yellow flag but pushed again to secure victory in his Prema-run, Theodore Racing-backed car.

Felix da Costa was forced to settle for second after his 2012 win, while Derani improved on his result last year of fifth as he completed the podium.

Alexander Sims had a relatively quiet run to fourth for T-Sport ahead of Jordan King, who rounded out his impressive rookie F3 campaign by finishing fifth and scoring the fastest lap of the race on the last lap. King benefited from a lap seven collision between Stefano Coletti and Will Buller ahead of him that put the former out of the race and dropped the latter down the order.

King’s Carlin team-mates Jazeman Jaafar and Carlos Sainz ended their challenging weekends in sixth and seventh respectively, while Tom Blomqvist came through from towards the back of the grid after stalling at the start of the qualifying race to finish eighth. Nicholas Latifi claimed ninth on his Macau debut while Esteban Ocon completed an impressive first international F3 weekend with tenth place, having dropped to the back on the opening lap.