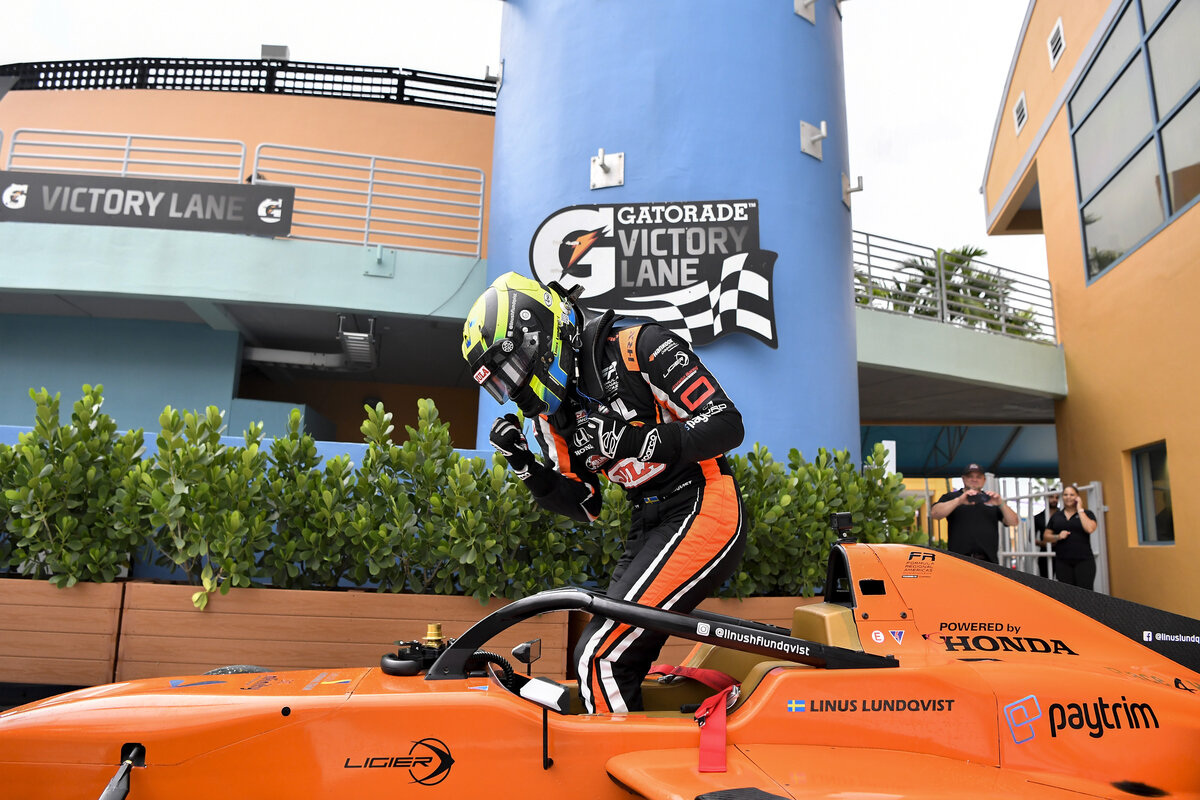 Linus Lundqvist continued his dominance of Formula Regional Americas by adding another two wins to secure the title at Homestead-Miami Speedway.

Heavy rain cancelled qualifying, and the race grid was decided by championship positions. Further delays didn’t stop race one from running on Saturday, and all teams elected to begin on slicks.

Lundqvist immediately charged off into the lead and began to establish a significant gap, while Joshua Car pitted with damage to his front wing and ended up two laps down.

By the halfway point Lundqvist’s lead was up to 6.5 seconds as Victor Franzoni attempted to fend off David Malukas.

Lundqvist would take his 11th win of the season with an 11s lead over Malukas and Franzoni.

Race two began with another battle between Lundqvist and Malukas, but it was the Swede who would once again have the upper hand.

Despite being 19s back, Logan Cusson was having his best race of the season running in third place a couple of seconds ahead of Nicky Hays and Jacob Abel.

By the end of the race Lundqvist’s lead over the field increased ever more as James Roe unsuccessfully attempted to snatch fifth from Abel.

Malukas snatched the lead at the start of race three and began to build a gap over Franzoni and Lundqvist.

Lundqvist took a number of laps to get past the Brazilian, but Malukas’ lead was soon over five seconds. Further back Cusson fought with Dario Cangialosi for fourth.

Once past Franzoni, Lundqvist quickly established a gap over his rival as he attempted to close down this season’s only other race winner. Lundqvist found his groove and set a number of fastest laps.

With 16-and-a-half minutes remaining, Malukas locked up and went across the grass at Turn 2. The gap to Lundqvist was soon down to under a second at the line.

The gap remained stable and Malukas held on to take his second win of the season but it wasn’t enough to deny Lundqvist the title – his second in Formula 3 – while Franzoni came home a distant third.