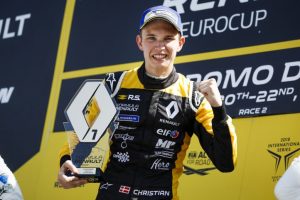 Points leader Christian Lundgaard heads a number of Formula Renault Eurocup stars who will take part in this weekend’s Northern European Cup round at the Pau Grand Prix.

MP Motorsport will field both Lundgaard and team-mate Alex Peroni, who beat Sacha Fenestraz to win on the streets of Pau last year when the event was part of the Eurocup schedule.

French outfits R-ace GP and Tech 1 Racing will both field four drivers each: in the latter case it will run its usual Eurocup quartet of Neil Verhagen, Alexander Smolyar, Frank Bird and Thomas Neubauer, who have also all been entered for round two of the NEC at Monza.

The next three NEC events following Monza – at Spa, the Hungaroring and Nurburgring – will all take place on combined grids with the Eurocup following a recent calendar shake-up.

R-ace GP will field three of its Eurocup drivers – Logan Sargeant, Victor Martins and Charles Milesi – but not Max Fewtrell, with its fourth car instead reserved for its full-time NEC entrant Gabriel?Gandulia.