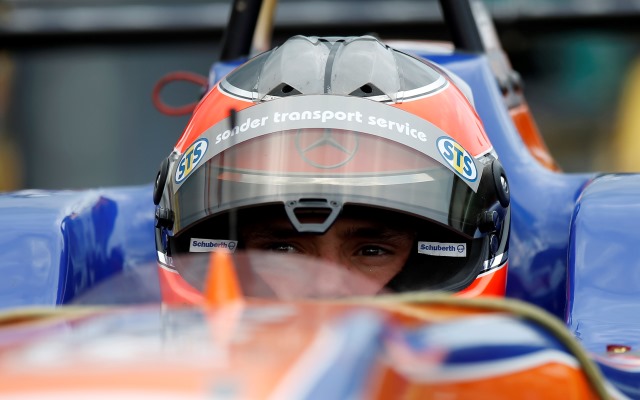 Lucas Auer posted the fastest time in first practice at the 2014 Macau Grand Prix got underway.

The Austrian made the most of a brief period of green flag running late in the session to move to the top of the timesheets, 0.055 seconds ahead of fellow late-improver Antonio Giovinazzi.

Erstwhile pace-setter Tom Blomqvist was shuffled down to third behind his Jagonya Ayam team-mate, while Will Buller was fourth in Signature’s first Macau session since 2012.

Jordan King made it three Britons in the top five, while Felix Rosenqvist was bumped down from second to fifth in the closing stages. Max Verstappen began his final race weekend before entering Formula 1 with the seventh best time, ahead of Nicholas Latifi, Stefano Coletti and Sean Gelael.

Gelael was involved in the delayed session’s first incident of note, when Martin Cao spun across his bows at Lisboa after contact. Sam MacLeod was the first to find the barriers in his TOM’S entry at Police, followed by another British driver in a Japanese team – Toda’s Dan Wells at Fisherman’s.

Another Japanese entrant Mitsunori Takaboshi brought out the red flags shortly afterwards with a crash at Moorish Hill, and European champion Esteban Ocon‘s car was wheeled back into the Prema garage with his front-left wheel hanging off, ending his session ten minutes early and restricting him to the 14th best time.

Spike Goddard later crashed at the same point as Takaboshi, bringing out a local yellow and denying late improvements.

The cars next take to the track for the first qualifying session.