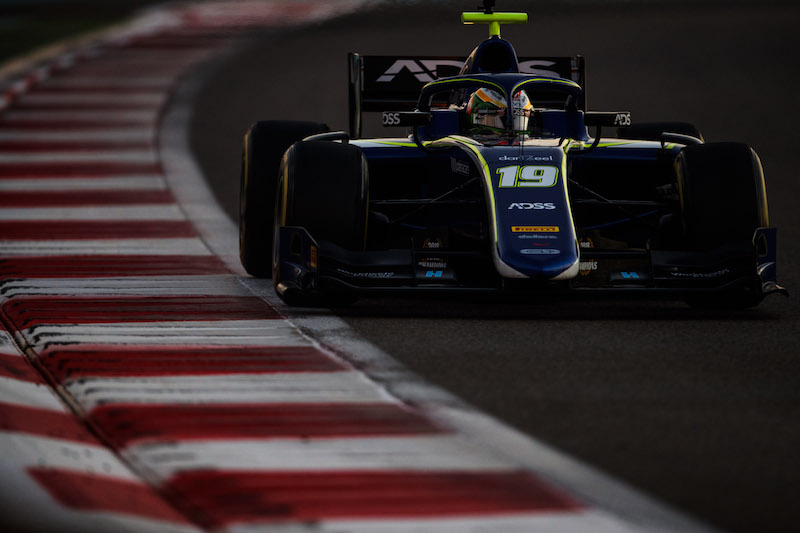 Louis Deletraz followed his debut Formula 1 test in Abu Dhabi by topping the opening day of Formula 2 running for Carlin.

Fresh from his run with Haas F1 team on Wednesday, Deletraz was back with Carlin for the first time since his one-off series debut at the same circuit two years ago.

Taking over the car used by Lando Norris this season, Deletraz rounded out the top 10 in the first session before leading the way in the evening with a 1m49.984s.

Returning to Russian Time after one year away, Luca Ghiotto set the pace in the morning with a 1m50.562s and was then?second in the evening, 0.143s behind Deletraz.

Callum Ilott was the quickest rookie in third position for Charouz as the Ferrari-backed GP3 graduate got his first taste of the F2 2018.

Tatiana Calderon also a set a strong time on debut in the team’s other car, only a tenth behind Ilott and sixth overall. The pair were separated by continuing DAMS driver Nicholas Latifi and Nyck de Vries upon his move from Prema to ART.

Sergio Sette Camara was seventh in his first run for DAMS, just ahead of the driver that has taken over his Carlin car, Nobuharu Matsushita.

Sean Gelael was ninth for Prema and Juan Manuel Correa made it three GP3 graduates in the top 10 for MP Motorsport.

His team-mate for the day, GP3 champion Anthoine Hubert, was 13th in the later session behind his chief rival Nikita Mazepin of ART and Prema’s European F3 champion Mick Schumacher.

Ryan Tveter was top newcomer in the morning in fourth for Trident behind only veterans Ghiotto, Latifi and de Vries, and ahead of Matsushita and Sette Camara.

Ilott and Hubert were seventh and eighth and their GP3 rival Leonardo Pulcini ninth for Trident.

The later session was interrupted for half an hour by a red flag due to a technical problem with the circuit’s lighting.