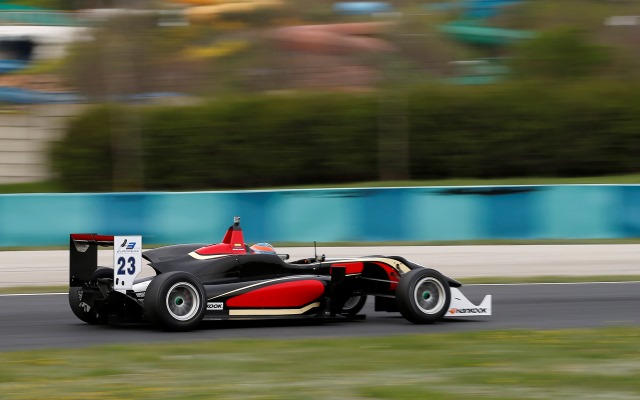 The French squad won the 2010 F3 Euro Series title with Edoardo Mortara, but quit the category at the end of the following season.

They were due to return in 2014 as part of Renault’s new engine project, but the programme was halted on the eve of the season. Signature later appeared at Imola and at the Macau Grand Prix with F3 veteran Will Buller driving a Volkswagen-powered Dallara for the team.

British-born Albon will make the step up to F3 after three seasons in Formula Renault 2.0, last year finishing third in the Eurocup and winning a race in the NEC.

“I am very happy to join the French team Signature,” said Albon, who turns 19 in March.

“With their good record in single-seaters and endurance, they are one of the top teams in international motorsport.

“After three years of FR 2.0, I discovered F3. We tested for the first time a few weeks ago. These first tests were more focused on understanding the car and the operation of the team, but I could also work on performance.”

“After only one year of single-seaters in F4, I discovered F3,” said the 16-year-old Frenchman, a long-time protege of the Gravity Sports Management firm owned by Lotus F1 boss Gerard Lopez.

“These initial tests made me take a huge step. I feel good in the team, there is a great cohesion and a good spirit. I look forward to taking to the wheel of the Dallara F3 very soon to improve my performance.”

Team boss Philippe Sinault said: “I am very happy and honoured by the trust placed in me by Lotus F1 Team Junior in giving me two of their drivers. The first tests went well. Dorian and Alexander discovered the F3 car and the team and they are very well acclimatised to their new environment. They have the ambition to follow in the footsteps of [fellow Enstone scholar] Esteban Ocon, who won the 2014 championship.

“At the end of last season we managed to come back with an efficient technical package and be in the game from the outset. Two cars is a good format, but we might have a third car if we find a quality driver. I also thank our partners without whom the?F3 adventure could not restart.”