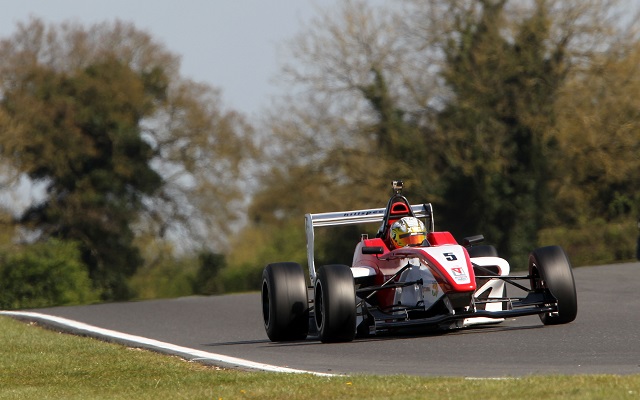 The Brazilian fended off constant attacks from reigning Protyre Formula Renault champion Chris Middlehurst throughout the race. The MGR racer came close to taking the lead on several occasions, but eventually crossed the line just 0.044s behind the winner.

The final podium position also remained contested for the entire duration of the race. Struan Moore held the position early on, even briefly challenging Middlehurst for second before being overtaken by HHC’s Sennan Fielding.

Fielding, however, would go off on the lap 13, dropping to fifth place and allowing two Lanan drivers through, with championship leader George Russell passing Arjun Maini for third on the final lap.

Race one winner Raoul Hyman took sixth behind Fielding, while Will Palmer was seventh ahead of Moore. Douglas Motorsport’s Mexican duo of Diego Menchaca and Rodrigo Fonseca rounded out the top ten.