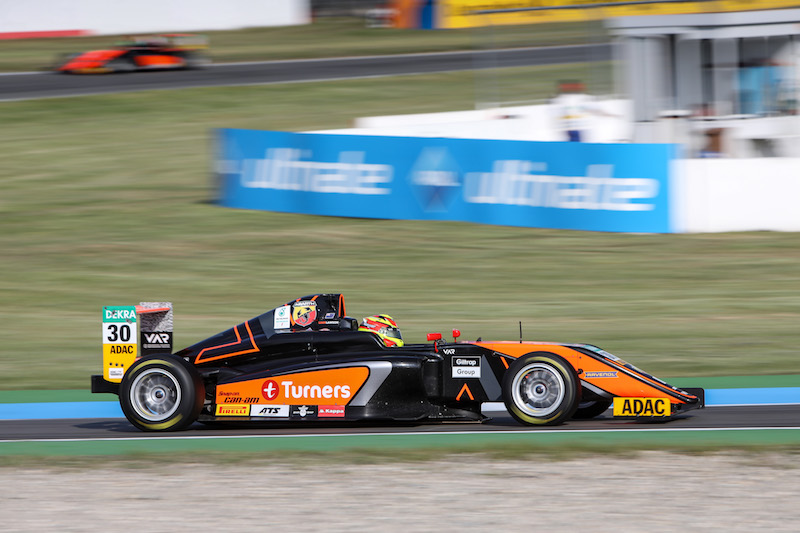 Liam Lawson closed the gap to Lirim Zendeli at the top of the ADAC Formula 4 championship with his second win of the season at the Lausitzring.

Lawson started from seventh on the grid, but passed Olli Caldwell and Mick Wishofer to take fifth before the end of the first lap. A move past Enzo Fittipaldi soon followed and he joined the back of the fight for the lead.

Pole sitter Joey Alders had retained the lead in the early stages of the race, but couldn?t quite shake team-mate Charles Weerts or US Racing?s David Schumacher.

Lawson managed to find a way past Schumacher with a move up the inside at the first corner, making it a Van Amersfoort Racing 1-2-3.

It wouldn?t remain that way for long, though, as Alders slowly dropped back, no longer able to keep up the defence he?d started the race with.

Lawson was promoted to P2 and quickly passed Weerts for the lead. Once in the free air, he began to pull away from his team-mate as Weerts battled with Wishofer and Zendeli for the runner up position.

He finished 2.281s clear of the rest of the field, bringing Zendeli?s lead at the top of the championship standings down to 36.5 points.

After a strong first half of the race, Alders finished outside the points. The polesitter had been defending against Schumacher when he ran wide into the gravel and span as he rejoined the track, forcing Schumacher to run wide to avoid the Van Amersfoort run car.

Both dropped down the order and Schumacher later pitted, though Alders was able to finish the race in P14.

Fredrik Vesti, who had started outside the top 10, managed to take P5 ahead of the Prema duo of Fittipaldi and Caldwell and top rookie Niklas Krutten, but the best recovery drive came from Guanluca Petecof.

The Prema driver started at the back of the grid after retiring from race two, but enjoyed a quiet race to finish ninth, with?Leon Kohler rounding out the top 10.