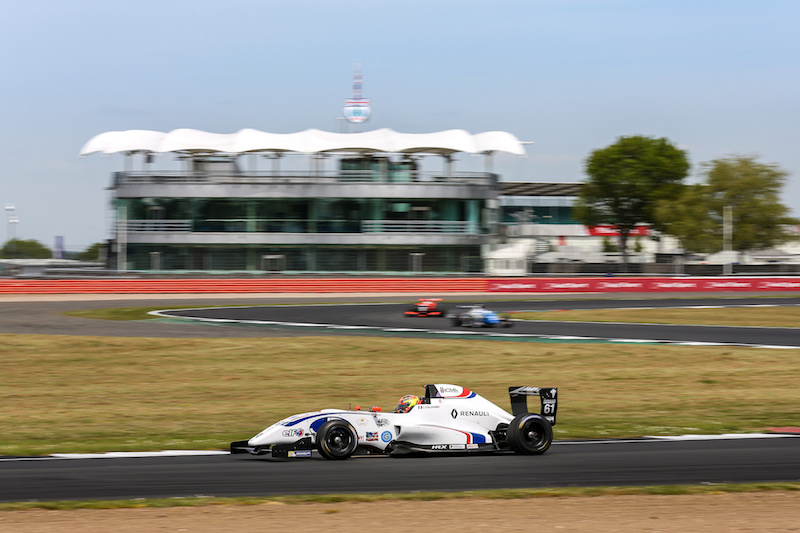 Formula Renault Eurocup rookie Lorenzo Colombo seized pole position for the second race of the weekend at Silverstone with his final lap of the session to deny Christian Lundgaard.

Lundgaard, who entered qualifying with a three-place grid penalty for his collision with Raul Guzman in Saturday’s race, claimed provisional pole with four minutes of the 15-minute second group qualifying session remaining.

A red flag caused by Red Bull junior Neil Verhagan?meant that the group would have enough time at the restart for one final attempt.

While only a handful of drivers found improvement on this final run, Colombo vaulted from sixth in the group to the top of the timesheet. He eclipsed Lundgaard’s previous benchmark by 0.042s.

Race one polesitter and dominant winner Max Fewtrell will start race two from 14th. He ended up seventh on the group one timesheet, with a 1m57.201s nearly 0.7s slower than his Saturday?pole time.

In posting the fastest group one time, Charles Milesi ensured that it will be an all-rookie front row. He battled for top spot with championship leader Yifei Ye throughout the session.

Ye improved on his final lap to demote Oscar Piastri from provisional pole before Milesi set session-best sector two and three times to climb to the head of the leaderboard.

With Lundgaard’s penalty dropping him to fifth on the grid, Ye will start from fourth. Logan Sargeant will line-up third after being the third fastest driver in the second group.

Max Defourny ended up fourth in the second group which converts to sixth on the grid, while Piastri will start seventh.

Alexander Smolyar, who had topped the times in the second group prior to Lundgaard lowering the benchmark, will start from eighth. Frank Bird’s race one ended in the gravel trap on lap one, but he will start race two from 10th.