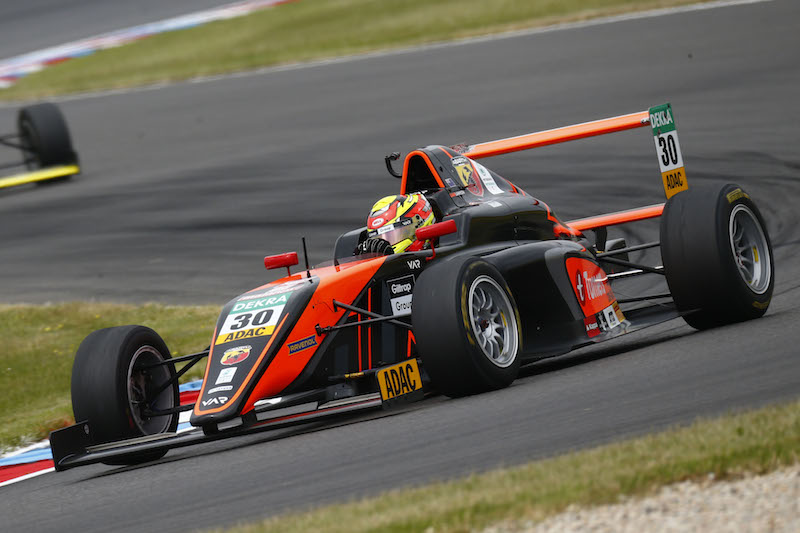 Liam Lawson picked up his first ADAC Formula 4 victory in the opening race at the Lausitzring after multiple cars were taken out by fluid on the track.

Oschersleben race winner Olli Calwell and championship contender Fredrik Vesti were amongst the nine drivers that were left stranded in the gravel after being caught out by oil spilt by Ido Cohen early in the race.

Race leader Lirim Zendeli was also caught out and ran through the gravel trap, but managed to return to the track without too much damage, retaining his lead as the red flag was brought out the clear the incident.

Zendeli led Lawson and Enzo Fittipaldi on the restart with just eight minutes on the clock. Lawson stuck with Zendeli but wasn?t close enough to make a move when the track turned green.

The Van Amersfoort driver was gifted the lead however when Zendeli slowed on the penultimate lap.

Zendeli came to a stop on track and Lawson was left unchallenged to take his maiden victory in the championship.

Fittipaldi held onto second ahead of Mick Wishofer and Konsta Lappalainen, who took his best result of the season so far.

Charles Weerts was another car that needed repairing under the red flag after he?d come together with David Schumacher at the start of the race as the pair battled for fourth.

The pair were running side by side when Schumacher ran over a kerb and hit Weerts. Both went through the grass and Weerts was forced to pit. He was able to restart the race from the pit lane and finished 10th, the final finisher.

Schumacher was handed a drive through penalty for the incident. He finished ninth.