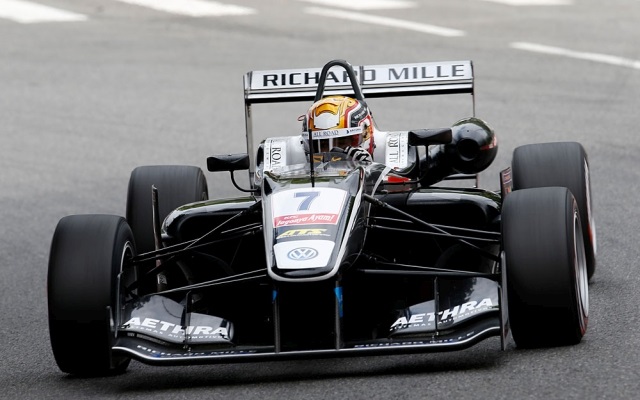 Although he will start from first on the grid for the third time this season, this was Leclerc?s first occasion topping a qualifying as his two poles at Silverstone were inherited after Felix Rosenqvist‘s exclusion.

In contrast to the previous time that the field was split into two for qualifying at Pau, Leclerc’s group containing mostly odd-numbered entries ran second.

Maximilian Gunther topped the first group by one hundredth of a second from fellow German Markus Pommer, but it did not take long for the benchmark time of 48.533 seconds to be bettered in the second group.

At one stage it seemed as if Leclerc was in control of the session, but fellow rookie Albon came on strong later on and proved his second place in practice was no fluke by exchanging fastest times with the Monegasque driver.

Leclerc came out on top in the end, but Albon was only 0.009s shy of a maiden F3 pole. The Lotus junior will have to settle for a place on row two however, with Gunther getting a front-row start for the first time after six previous third-place starts in a row at Hockenheim and in Pau.

Felix Rosenqvist and Antonio Giovinazzi were not far behind the top two in the second group, but will have to do with fifth and seventh respectively on the grid.

They will both however be ahead of Spa double winner Jake Dennis, who was fighting with Gunther to top the first group before a red flag caused by Pietro Fittipaldi paused the action.

There was just enough time to restart the session, and enough for Pommer to briefly take the lead from Gunther before the Mucke driver claimed it straight back again. There was also enough time for Dennis to be pushed down to fifth behind Dorian Boccolacci (who completed a fine session for Signature by claiming sixth) and Alessio Lorandi.