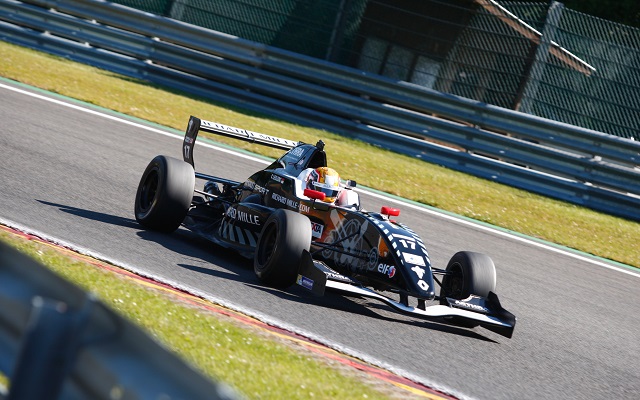 Leclerc finished second on the road and was promoted to first due to poleman Stefan Riener‘s penalty.

The Cram Motorsport driver comfortably led the opening laps of the race but was found guilty of having jumped the start and picked up an additional ten seconds to his finishing time. With the German running a couple of seconds ahead, a very close fight for second unfolded between Leclerc and Matevos Isaakyan.

As Riener’s penalty was announced, the battle between Leclerc and Isaakyan took on an entirely new meaning. However, the intrigue was over in just a couple of laps, when the SMP-colored machine of the Russian racer was collected by the lapped car of Sun Zheng spinning out of Parabolica.

Following Isaakyan’s retirement, Leclerc managed to maintain a relatively stable gap to Riener and finished well within the ten-second window, inheriting the victory.

Riener’s Cram teammate Alessio Rovera also managed to keep up and finished eight seconds behind, which allowed him to pick up second place and demoted Riener to third.

Championship leader Nyck de Vries charged his way through the field to take fourth at the flag. The race leader’s penalty gave de Vries a feasible chance of maintaining his streak of podium finishes, but the Dutchman couldn’t stay within ten seconds of Riener and had to settle for a solid fourth place.

Ben Barnicoat fought his way up to fifth, finishing two seconds ahead of Luke Chudleigh and Martin Kodric. Semen Evstigneev was eighth at the flag but received ten seconds post-race for cutting the chicane. As such, Akash Nandy, Matteo Gonfiantini and Alex Bosak rounded out the top ten.