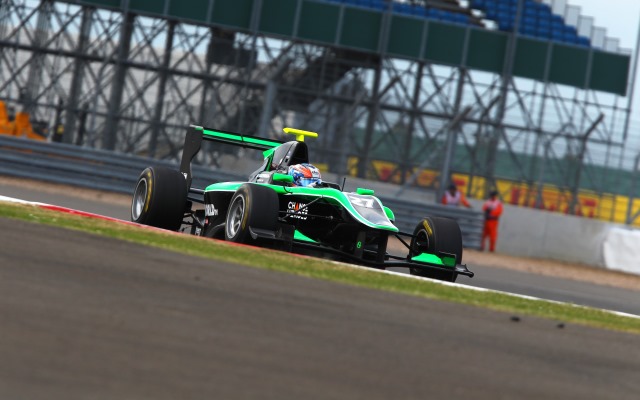 Richie Stanaway scored the first win on his return to single-seaters in a one-two finish for Status Grand Prix in race two at Silverstone.

From second on the reverse grid, Stanaway moved into the lead off the start as pole-sitter Dino Zamparelli fell to fifth.

Emil Bernstorff threatened Stanaway for the lead at the start of the second lap, but the Carlin man then found himself defending from the second Status car of Nick Yelloly, who got past on at the outside at Brooklands.

Stanaway claimed victory by 2.7 seconds over Yelloly, taking his first victory since 2011 and the locally-based team’s first win since Monaco 2012.

Bernstorff completed the podium, with Marvin Kirchhofer fourth. With the top four settled early on, the focus for the rest of the race switched to the fight for fifth.

A strong start got Stoneman up into fifth but he later had to defend from Riccardo Agostini. When the impressive Italian got down the inside at Copse on the penultimate lap, Stoneman slowed dramatically.

That promoted the battle between Zamparelli and Alex Lynn, with the latter claiming sixth into Village on the last lap.

Lynn had once again lost out on the opening lap, as he did in the Sunday races in Barcelona and Spielberg, and on lap two dropped to 12th behind the even slower-starting race one winner Jimmy Eriksson. The Red Bull Junior’s recovery was helped when Patric Niederhauser and Eriksson found the gravel scrapping over ninth.

Niederhauser had been trying to pass Pal Varhaug, who had only stayed ahead by running off track at Becketts. As Niederhauser tried to complete the move at Club, race one winner Eriksson got too greedy and hit Niederhauser. Varhaug also slowed with damage.

Zamparelli finished seventh ahead of Matheo Tuscher, with the third Carlin and Status cars of Luis Sa Silva and Alfonso Celis completing the top ten.