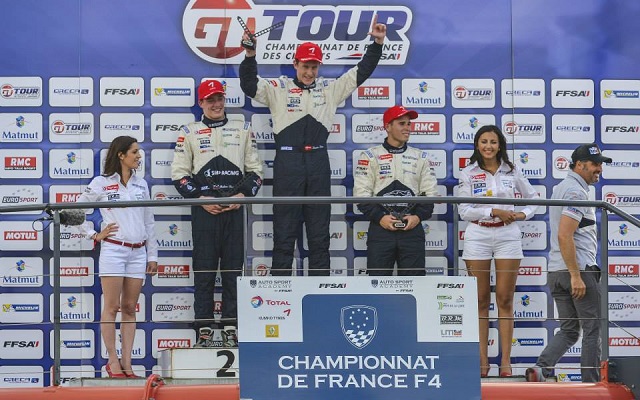 Having started from tenth due to the reverse-grid rule for race two of the weekend, Lasse Sorensen overcame the odds to pick up another victory in French F4’s round three at Val de Vienne.

The young Dane was eighth after the start and then managed to fight his way through the bunched up pack to join the battle for victory.

Reverse-grid poleman Valentin Hasse-Clot managed a smooth getaway off the line and assumed the early lead, helped out by Amaury Richard‘s slower start from P2.

Richard allowed Hasse-Clot to further pull away during the opening lap as he defended the position from Lotus junior Dorian Boccolacci, with the two making contact in the process.

Despite the incident, both resumed with only cosmetic damage. Shortly thereafter, Boccolacci forced the issue into turn one and took over in second, with Joseph Mawson and Bryan Elpitiya also getting through on Richard.

While Hasse-Clot did manage to build up a solid lead early on, it virtually evaporated when Boccolacci got into clean air. The Lotus youngster soon found himself stuck behind the race leader, with a train of cars forming behind.

It was then that Sorensen managed to make up the most ground. The Dane passed Elpitiya and Denis Bulatov in quick succession, before overtaking Mawson for third during that same lap.

Sorensen then attempted an audacious move around the outside on Boccolacci and Hasse-Clot but couldn’t make it stick. However, Hasse-Clot crumbled under pressure and spun out, briefly impeding Boccolacci and allowing Sorensen to sneak through into the lead.

From that point on, it was smooth sailing for the rapid Dane who immediately pulled out a solid advantage over Mawson, Bulatov and Boccolacci and went on to claim victory.

A last-lap overtake allowed Bulatov to take second from Mawson with Boccolacci and Patricio O’Ward bringing up the top five close behind.

Race one podium finishers Felix Hirsiger and Paul Hokfelt were involved in an incident on lap three that ended their respective races.