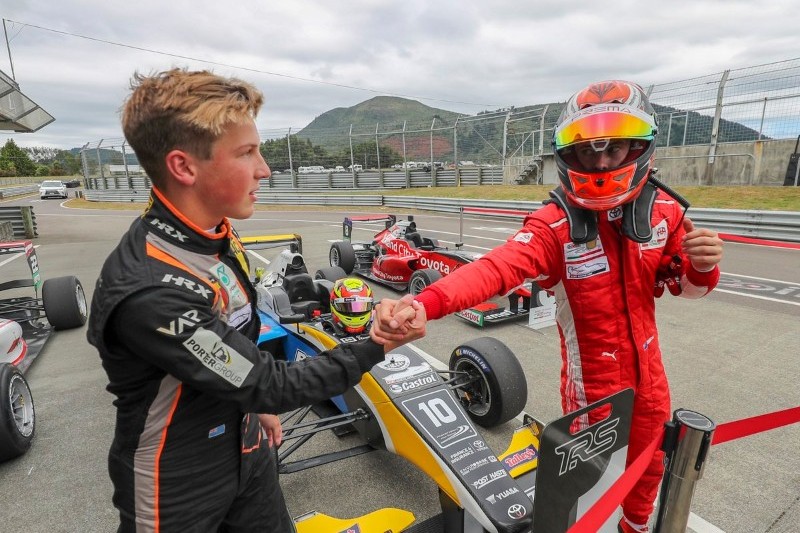 Liam Lawson won the 2019 Toyota Racing Series with victory over Marcus Armstrong in the season-ending New Zealand Grand Prix, a result decided by a penalty for Armstrong after an earlier skirmish.

Lawson led at the second restart of the race, but Armstrong was quick to pull alongside him. The pair ran side-by-side for several corners, with Lawson sticking to the riskier outside line until Armstrong forced him wide.

The 16-year-old had to bounce over the grass before regaining control of the car on track, albeit now down in fourth behind Esteban Muth and Brendon Leitch.

His recovery was postponed when Dev Gore and Jackson Walls collided and prompted the third red flag period of the race. On the restart, he, Muth and Leitch ran three abreast, with Lawson leapfrogging both to take second and begin to close the gap to Armstrong.

As news of Armstrong’s penalty came in, the Ferrari junior began to pull away, but could only extend the gap to just over two seconds, meaning Lawson inherited victory and as a result the TRS title by 10 points.

“It’s definitely pretty cool. I was really nervous going into that race, as I’ve been wanting to do this [event] for a long time,” Lawson said.

“To win in my first season is pretty incredible. Massive thanks to M2 Competition, they’ve done an amazing job.

“The whole series has been so close. I thought the race was over after Marcus ran me off the track, I thought that was it. But I fought on, and he got a penalty for it.”

The 35-lap race was dotted with red flags, safety cars and multiple retirements, started by a solo crash for Petr Ptacek.

The resulting red flag period put Muth on the tail of Lucas Auer, who was running third in the early stages after starting from pole. Muth passed the Austrian on the restart, a move he was penalised for, and later around the lap Auer was pulled into the clutches of Leitch and Das.

Leitch got through, whereas Das hit the back of Auer, turning him around and causing an accidental blockade that also included Thomas Smith, Calan Williams, Artem Petrov (who returned to the pits) and Raoul Hyman (who was able to restart).

Muth finished the race third on the road, but dropped behind Toyota protege Kazuto Kotaka and Hyman after his penalty was applied. Leitch had run ahead of all three, challenging the leaders at one point, but a mistake late on dropped him down the order and he didn’t recover.

Parker Locke and Kenny Smith were the only other two finishers, with 77-year-old Smith taking his best TRS result since 2010 in eighth place.