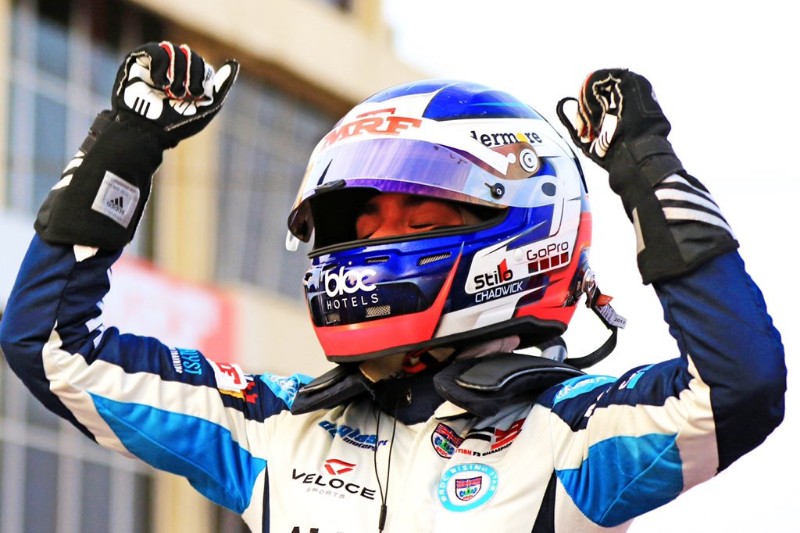 Jamie Chadwick became the first female to win the MRF Challenge title with her fifth and sixth wins of the season at Chennai.

The 20-year-old came into the final day of the season with a one-point lead over Max Defourny, but increased that to 37 points. Defourny could only manage one top five finish, ending a torrid weekend for the Belgian.

A collation of the fastest laps of the weekend formed the grid for the title deciding race, with Patrik Pasma on pole ahead of Defourny and Chadwick. Neither driver on the front row could hold of Chadwick, who sneaked between them to take the lead and a 1.069 second victory over Pasma.

Defourny dropped to seventh and only recovered one place due to the retirement of BRDC British Formula 3 champion Linus Lundqvist, who was in second place, at quarter-distance.

The two title rivals had squared up to each other in the first race of the day, when a safety car allowed Defourny to catch up to Chadwick in fifth. However the challenge didn’t last long, and Jack Doohan managed to get past Defourny too.

Pasma was Chadwick?s chief rival on-track. He won the opening race of the day in fine style from pole, ahead of a charging Michelangelo Amendola, and was gaining on Chadwick in the latter stages of the season finale. The middle race of the day didn’t go to plan for him though – being passed by Defourny on lap one but still managing to finish sixth in a chaotic race that was red flagged.

Defourny had attacked Amendola and gone off track, causing Valdemar Eriksen to flip his car,? resulting in two further reitrements for Sebastian Estner and Joshua Mason. Chadwick was unaffected by the chaos erupting behind her, repeating her startline pass on Doohan at the restart for the lead, and beating Amendola to victory.

Amendola’s trio of podiums, having finished third in the final race, kept him fifth in the standings, while Pasma just beat Estner to a distant third behind Chadwick and Defourny.

Chadwick is in contention to race in the W Series this year, while Pasma will graduate to the Formula Renault Eurocup with Arden.