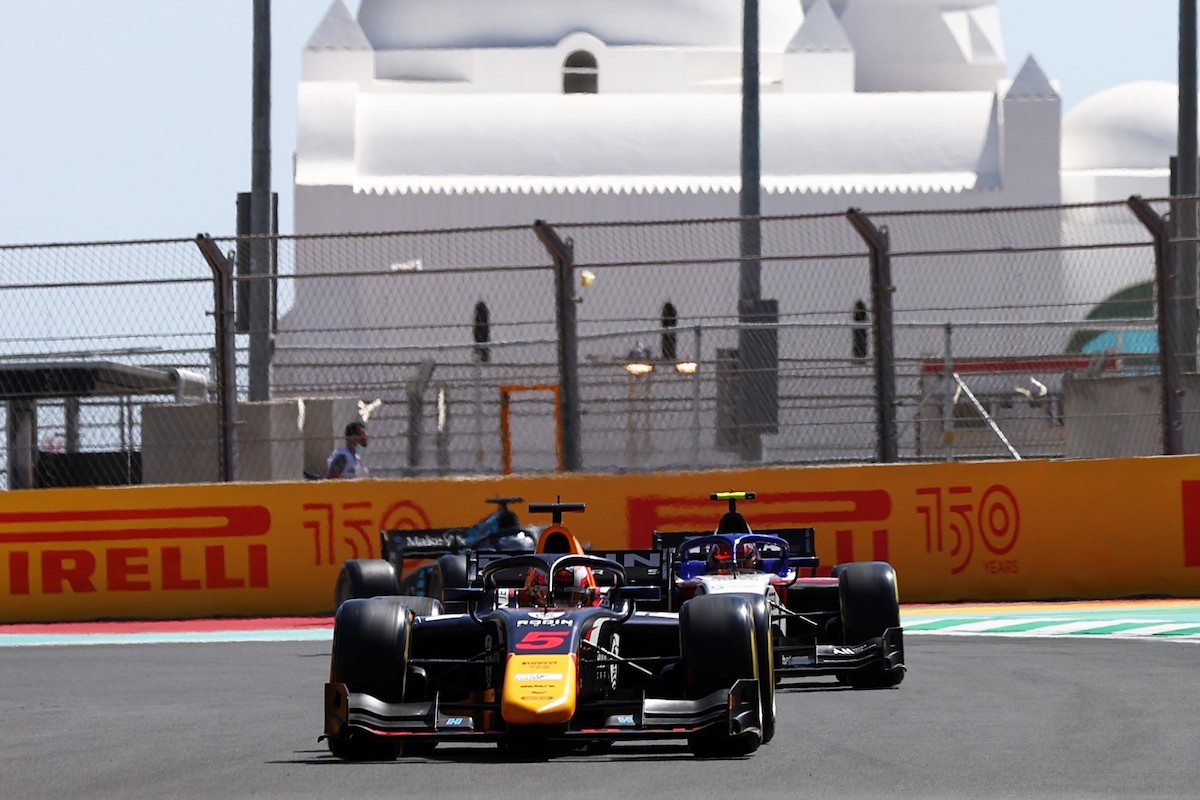 Several post-qualifying penalties resulted in Prema’s Dennis Hauger starting from pole instead of Van Amersfoort Racing’s Hughes, who lined up second. The Norwegian led comfortably into turn one, helped by Hughes getting a slow start despite beginning the race on the softer tyre.

Hughes regained one of the two places lost at the start by going into the inside of DAMS’ Ayumu Iwasa at the last corner. Carlin driver Lawson also tried to take advantage from Hughes’ move on Iwasa, but the Japanese was able to stay ahead of the New Zealander. Just behind them, Campos Racing’s Ralph Boschung, who had had a good getaway, dropped two places to the Hitech GP duo of Marcus Armstrong and Vips.

It wasn’t long until the safety car made its first appearance on track after VAR’s Amaury Cordeel ended up in the wall on lap two.

Four laps later, a slow restart procedure led by Hauger triggered a fresh incident at the back of the pack. Logan Sargeant exited the last corner at racing speed only to find out the cars in front were still travelling slowly. Sargeant braked heavily and Jack Doohan couldn’t avoid him and hit him from behind.

This brought the safety car out again and cars were initially told to go through the pit lane. However, a few moments later, the pits were declared closed, with the crashed cars situated right at the entry.

Nevertheless, Hauger drove into the pits anyway, rejoining down in 12th position as everybody else continued on track and picked up the safety car. Hauger then received a 10-second stop-and-go penalty as a result, even though Prema told him over the radio that race control had confirmed to them that he should travel through the pits.

The race resumed at the end of lap 13 out of 20, and Hughes took advantage of being the only one of the leaders on soft tyres by snatching the lead from Trident’s Calan Williams.

On lap 17, Lawson overtook Hughes for first place as the Briton’s tyres started to fade away and went on to win the race by three seconds.

A brief virtual safety car was required on lap 18 after Armstrong spun out of the race while running in fourth place. There would be still time for one more lap of racing through, and Vips closed on Hughes to pass the VAR driver for second as they crossed the finish line.

Lots of action happened over the rest of the points positions, with MP Motorsport’s Felipe Drugovich and Trident’s Richard Verschoor being the biggest winners to finish fourth and sixth respectively.