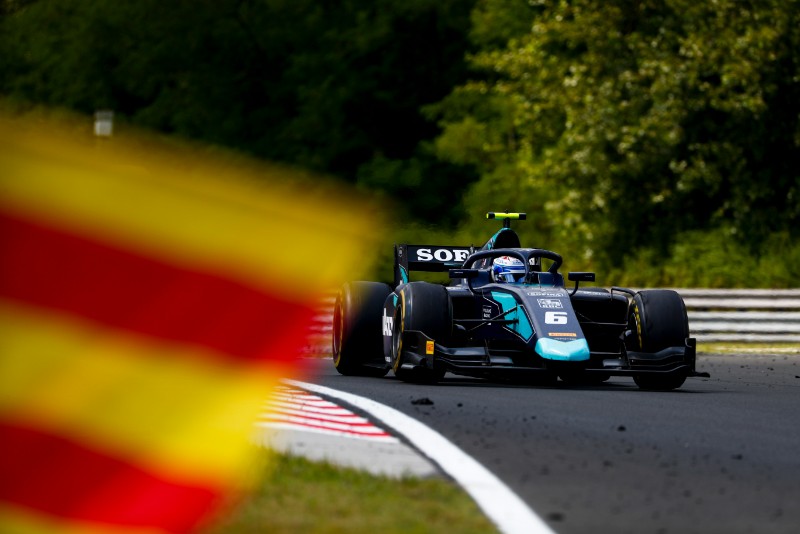 ART Grand Prix’s de Vries made a poor start from pole, but lost the lead to DAMS’ Latifi by going too deep into Turn 1.

With Virtuosi Racing’s Luca Ghiotto just behind, the three title contenders pulled away in the opening laps of the race and all pitted in the first quarter of the race to switch from their soft tyres.

This left the drivers who had started on the alternate strategy up front, with MP Motorsport’s Jordan King leading Arden’s Anthoine Hubert sticking on their medium tyres until the final quarter of the race.

Latifi had already passed Hubert by the time the Frenchman stopped, and his navigation of the yet-to-stop drivers on the alternate strategy enabled him to open up a gap of several seconds to de Vries.

King had a seven-second lead prior to his stop, which returned the lead to Latifi, and he returned to track at the bottom of the top 10. He immediately set fastest laps, and brought himself on to the back of the cars ahead.

Campos Racing’s Jack Aitken had jumped into what would become third during the early pitstops, but worked through his tyres quicker than his rivals. This meant he had a train of cars sticking to his gearbox as the race wore on, and more joined when Aitken encountered yet-to-stop traffic.

Ghiotto and Prema’s Mick Schumacher initially looked like the drivers who would get past Aitken first, but Schumacher’s traffic navigation ruled him out before he encountered his own tyre wear issues.

Having been a provisional fourth since his stop, Ghiotto was inflicted by his own tyre issues but managed to beat DAMS’ Sergio Sette Camara and Carlin’s Nobuharu Matsushita, the trio going three-wide through Turn 2 as they fought for position.

King looked set to pass all three, but an oil-spilling engine failure for Trident’s Ralph Boschung with three laps to go meant the race finished under the safety car. While Aitken was glad of the intervention, King rued that it “spoilt our fun” over the radio as he finished in sixth. Time penalties were then handed to Ghiotto and King for a safety car infringement, dropping them to sixth and seventh.

Schumacher will start the sprint race from pole having finished eighth, with Guanyu Zhou (Virtuosi) and Callum Ilott (Sauber Junior Team by Charouz) denying Hubert a point after his late stop.