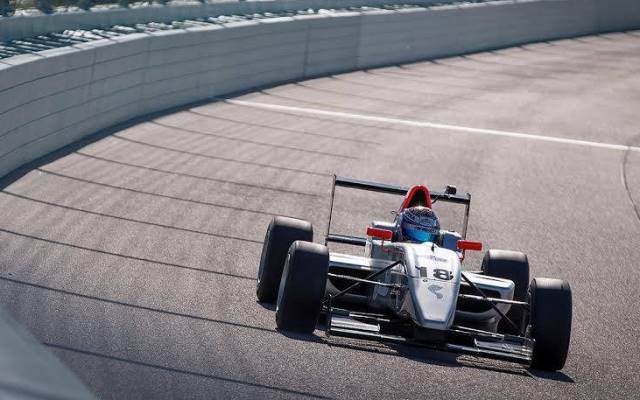 Nicholas Latifi surged from tenth on the grid to claim his second win of the Florida Winter Series finale at Homestead in race two.

The reverse grid put Vasily Romanov on pole position, but it was fellow front-row starter Dennis van de Laar led at the end of the opening lap.

The Dutchman held on up front until lap five, when he was overtaken by compatriot Max Verstappen, who started seventh.

Latifi was now up to third having passed Ferrari stars Raffaele Marciello and Antonio Fuoco on the same lap, and by the end of lap six he was past van de Laar and on Verstappen’s tail. He was soon past, and although Verstappen would fight back a few laps later, Latifi eventually managed to shake him off.

Verstappen began to come under pressure from Marciello, and the pair collided on lap 17, putting the latter out on the spot and relegating Verstappen down the order.

Latifi finished up with a six-second winning margin, and also had the bonus during the race of being confirmed by Prema as part of their FIA F3 line-up for the coming season.

Ed Jones inherited second place after starting eighth. After losing the lead, Van de Laar fell as far down as seventh at one stage but recovered to finish in third.

Antonio Fuoco briefly held second place late on before slipping back to fourth. After dropping to seventh after his clash with Marciello, Verstappen twice recovered to fifth. Romanov fell down to tenth at one stage but came back to sixth ahead of journalist Ollie Marriage and Takashi Kasai.

Alex Bosak finished the race in the pits, one lap down, while Tatiana Calderon stopped with two laps remaining.