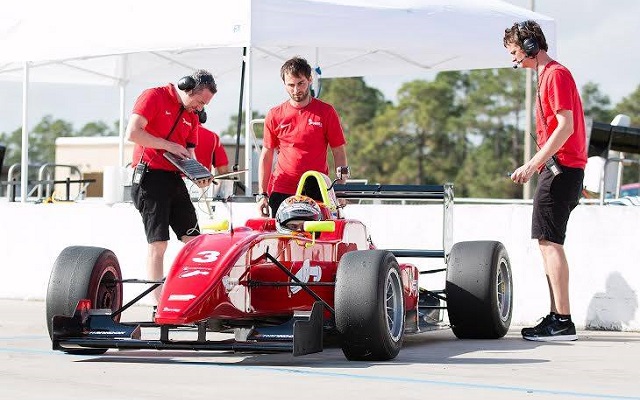 The sixth Homestead outing, which is bound to go down as one of the finest races of the year, saw more than ten lead changes at the front, most of which came as a result of Latifi and Verstappen’s relentless, race-long battle for victory.

After the quickest driver of qualifying two, Antonio Fuoco, had received a five-place grid penalty for jumping the start in race two, the pole was inherited by Ed Jones, while Latifi moved up on the front row, coming into the race on the back of two wins in the two prior races of the round.

Both front row starters managed a smooth getaway from the line, and while Jones got to briefly maintain the lead over the opening lap, Latifi would shortly make the overtake at the start-finish straight in a sign of things to come.

The Canadian settled into the lead, with Jones occupying second, but the focus of Latifi’s concerns would soon switch to Verstappen, who powered his way through to the front after a rather slow start and managed to slipstream his way into the lead by lap four.

The battle between Latifi and Verstappen would shape the remainder of the race, as the pacesetting pair took turns slingshotting past each other on the main straight, while simultaneously leaving the rest of the rivals behind.

Latifi briefly appeared in control midway through the race, when he managed to hold on to the lead for numerous consecutive laps, but the Canadian did not build enough of a gap and was back to square one for the final minutes of the race.

The last four laps delivered a pulse-pounding conclusion to the championship, as the fighting duo would take turns in lead with every given lap. Latifi entered the final lap with a 0.02s advantage over the Dutchman and, a lap later, they crossed the line side-by-side, with Verstappen edging out the win.

Behind them, there was a spirited fight for the remaining podium position between Jones, Fuoco and Raffaele Marciello. The Emirate racer saw off the challenge from the Ferrari juniors to eventually take third, while Marciello snuck his way past Fuoco to secure fourth.

In sixth, Takashi Kasai produced his best showing of the season, having at one point in the race seriously challenged Marciello up ahead. Alex Bosak took seventh ahead of Vasily Romanov, with Ollie Marriage rounding out the field.

Tatiana Calderon and Dennis van de Laar were the two retirements of the race, having pulled into the pits at different stages. Lance Stroll, having qualified on front row, did not take to the start due to an apparent scaphoid fracture.