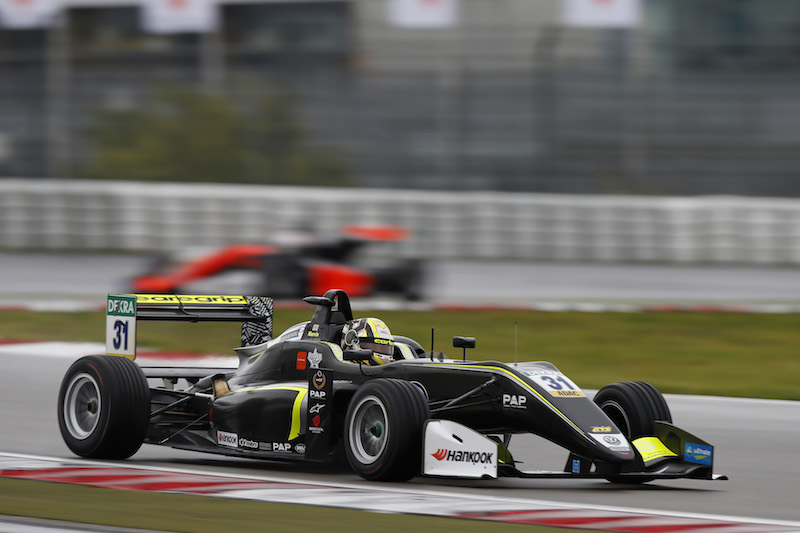 Lando Norris took a commanding win in a wet first race at the Nurburgring to provide a significant boost to his Formula 3 European Championship lead.

After taking pole position by nearly a second in wet conditions in qualifying, Norris kept the lead at the start and was 2.6s ahead at the end of the first lap.

The Carlin driver did make one mistake in the middle of the race when he went off onto the run-off area on the outside of Turn 2 and lost a couple of seconds, but he had already been 11s clear when it happened.

He ultimately finished 17.5s ahead of the rest in a race that included two full-course-yellow periods.

Starting second, Jake Hughes was swamped by the faster-starting Prema cars of Callum Ilott and Maximilian Gunther off the line, but after the opening turns of lap two, he had regained a second place that he would comfortably maintain until the finish.

Nikita Mazepin was running fourth behind Hughes and Ilott when he was hit from behind by debutant Sacha Fenestraz under braking for Turn 1 at the start of lap three.

The Hitech driver almost collected Ilott ahead as he slid into the gravel trap and out of the race, while Fenestraz was forced to pit for a new front wing before he was later slapped with a drive-through penalty.

After the resultant FCY, Ilott was passed by Joey Mawson, and a later off at Turn 1 put the Briton into the clutches of an impressive Tadasuke Makino.

The second FCY came after Pedro Piquet slid off into the barriers out of eighth place at the cut-through on the short Nurburgring layout with around 10 minutes remaining.

Mawson, who lost the tip of his car’s nosecone early on, struggled after the restart and came back under pressure from Ilott, with the pair looking close to contact when they went side-by-side at the chicane with a couple of laps to run.

Both failed to make the corner, but one lap later, it looked as if Ilott had the move done when he dived down the inside under braking, only for Mawson to somehow to hang on around the outside.

Makino took advantage of Ilott’s compromised line to get up to fourth, with the Honda protege claiming his best European F3 result to-date as Mawson clinched a long-awaited maiden podium.

The Carlin duo of Ferdinand Habsburg and Jehan Daruvala caught the battle for third at the end and completed the top seven.

Debutant Max Defourny had been harrying his Van Amersfoort team-mate Piquet for eighth when the Brazilian went off, but following the subsequent FCY, the Formula Renault regular went off himself at the final corner.

He finished 11th behind Mick Schumacher, Guan Yu Zhou and Joel Eriksson, but did set the fastest lap on the final tour.

Eriksson was spun around early on by contact from Harrison Newey and seemed to lack the pace to make up significant ground in a race where his Motopark team-mates struggled even more.

After his initially good getaway, Gunther slipped back on the first lap and made contact at the chicane with Ralf Aron, and pitted for repairs during the first FCY.

He finished 13th, allowing Norris to move 36 points clear of him at the top of the standings. Eriksson is now 79 points adrift.