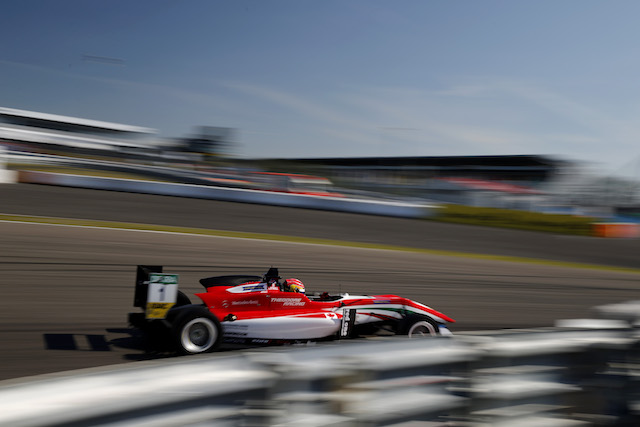 Lance Stroll has taken his sixth win of the season in the first FIA F3 European Championship race of the weekend.

After making the perfect start from pole position, Stroll cruised his way to the chequered flag by nearly seven seconds from his nearest competitor and team mate Maximillian Gunther.

When the lights went out, it was Joel Eriksson?from fifth on the grid that made the most aggressive start, shooting out to the right to cover off the Prema car of Ralf Aron.

Unfortunately for the Swede, he wasn’t able to hold off the Estonian and lost out by the second turn. Meanwhile,?Guanyu Zhou was busy defending from those behind him, only for him to lose out to both Niko Kari and Ben Barnicoat heading into turn five.

Meanwhile, up ahead it was Stroll leading from Nick Cassidy and Gunther, but when Cassidy?slowed on the back straight,?both Gunther and George Russell?were able to overtake him over the next few corners as the Kiwi dropped back.

Cassidy then had another issue when he jumped?the final chicane, losing him more time and allowed Callum Ilott to get right onto his gearbox, where?he remained for the rest of the race.

While this was happening, after being given a ten place grid drop?for an engine change, Sergio Sette Camera was holding onto tenth position before being overhauled by Anthoine Hubert going into turn one.

But no one was able to stop Stroll, who had pulled out a massive lead of nearly seven seconds to take the win, with Gunther and Russell rounding out the podium.