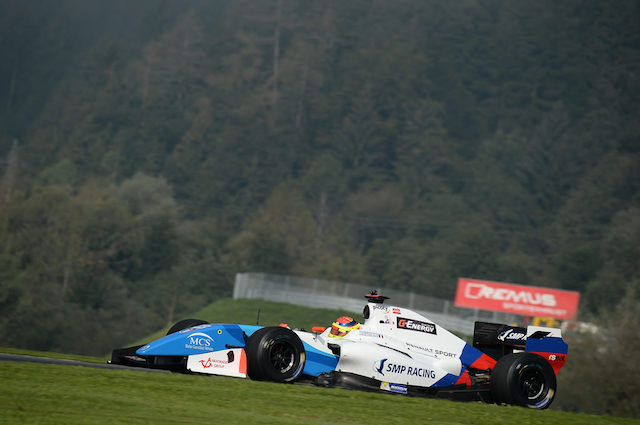 Matthieu Vaxiviere has won the first race of the Formula V8 3.5 weekend at the Red Bull Ring.

After getting the better start off the front row, the French driver led a lights to flag race to the finish line to take his second win of the season.

When the lights went out, it was Vaxiviere that made the better start as?Louis Deletraz bogged down in?pole position. As the drivers made their way up to turn two, Egor Orudzhev?was able to pass the slower Deletraz for second position as championship leader Tom Dillmann fell back to fourth place.

Deletraz wasn’t going to let second place get away from him though, and attempted a late dive down the inside of Orudzhev into turn two. The pair bounced off each other after making slight contact, but it didn’t compromise Deletraz’s run on the Russian driver as he swooped around the outside of him into turn four. With Orudzhev now relegated to third position, it allowed Dillmann to catch back up to him.

Behind the front runners?was the fight for fifth position, with Dillmann’s team mate Alfonso Celis leading a train of drivers around the Austrian circuit. Rene Binder in the Lotus car made an attempt on the Mexican driver going into turn three, but was unable to make a clean pass on him.

Suddenly Orudzhev’s Arden suffered another mechanical issue, allowing Dilmann an easy pass for third and promoted everyone up a position as the Russian driver retired for the sixth time this season.

Binder was the next car to fall ill to mechanical gremlins, as the Lotus driver crawled to a halt on the pit-straight. Binder had moments before been involved in another incident with Celis, with the Mexican squeezing him off the road at the top of the track, potentially breaking the underside of his car. With Binder’s car now stranded on the pit-straight, the safety car was called out so the car could be removed.

The safety car came in with five minutes left on the clock and Vaxiviere made the start he needed to stay ahead. Meanwhile, Roy Nissany was able to pass Yu Kanamaru around the outside of turn two to put himself up into sixth position.

Despite closing in, Deletraz was unable to pass Vaxiviere for the win by?the chequered flag. Third place went to a rather distant Dilmann, with Celis holding off?Aurelien Panis?for fourth position. Nissany had to settle for sixth, ending his four podium streak, with Kanamaru following him home in seventh.