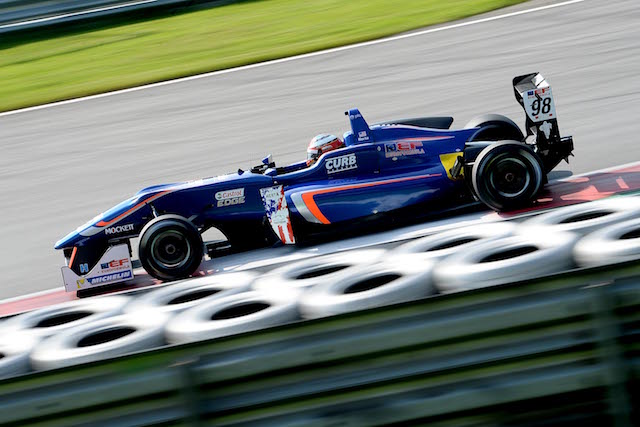 Colton Herta has taken his?and the Carlin team’s first Euroformula Open win during the opening?race at the Red Bull Ring.

After avoiding the melee at the start of the race, Herta held off the charge from Ferdinand Habsburg to take the win by nearly four?seconds.

At the start of the race,?Diego Menchaca?made a super start to take himself?from fourth?position on the grid?up into third by the first corner, but the Mexican driver lost the back end of his car coming out of the corner, spinning around on the spot and triggering a massive crash as Antoni Ptak was caught unsighted and?slammed into the stricken Campos car. With others attempting and failing to avoid the incident, it?immediately brought out the safety car as the debris of seven?cars took several laps to clear.

At the restart, Leonardo Pulcini got a run on Herta into turn one, but his car lost grip and he nearly ended up doing exactly what Menchaca did. He managed to catch the car before hitting the tyre barrier, but lost several positions in the process. This allowed both Habsburg and Calderon back ahead into second and third positions.

Keyvan Andres was passed by?Tanart Sathienthirakul for fourth position coming out of turn three, with the German driver then nearly conceding another position to?Damiano Fioravanti, but the Italian?overshot turn three and ended up in the gravel trap.

Pulcini was the next to make a move on the struggling Andres by out dragging the Carlin driver at?the top of the track to have the move?done by the time they made it to turn two.?Nikita Troitskiy was another victim of the turn three gravel trap, this time letting Fioraventi back through for seventh?position, only for the Russian driver to get him back a few turns later.

Pulcini continued his fight through the field as he overtook?Sathienthirakul for fourth position as he set his sights on Calderon.

But with his lead ever increasing, nothing was going to stop Herta as he crossed the line nearly four seconds ahead of?Habsburg at the chequered flag. Calderon took third position a further seven seconds back, as Pulcini ran out of laps to get himself back on the podium.

Sathienthirakul finished the race in fifth, ahead of Andres who takes his best finish of the season in sixth.?Debutant Troitskiy finished in sixth position after holding off?Fioraventi at?the finish line. Ameya Vaidyanathan?and?Nikita Zlobin rounded out the top ten, with both drivers taking their first points of the season.