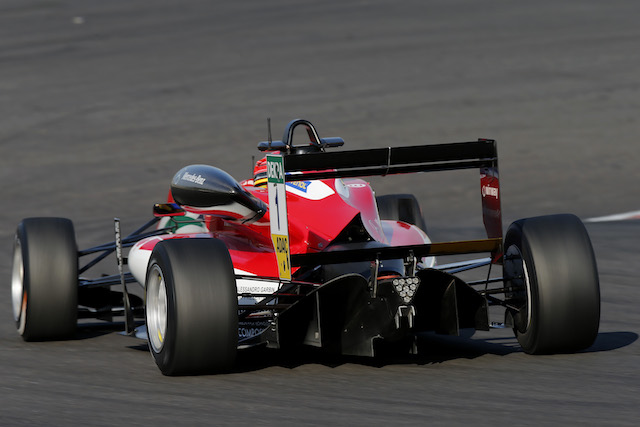 Lance Stroll has won again at the Nurburgring in the second FIA Formula 3 European Championship race of the weekend.

Although he lost the lead at the start, Stroll was able to work his way onto the back of Maximillian Gunther to make a decisive pass down the back straight to regain first position.

When the five lights?went out, it was Gunther with the better start over Stroll, with the German driver able to force his way into turn one. Joel Eriksson also made his way past?George?Russell for third position after running Russell out wide on the exit of turn one.

But then several incidents?all happened within the space of a few corners bringing out the safety car. The first involved Callum Ilott and Nick Cassidy, with the pair running out wide on the exit of turn five and then coming?together. Ilott was able to continue on but Cassidy spun back across the track, luckily making no contact with anyone else, and retired with suspension damage.

Moments later coming into the final?chicane, Ben Barnicoat drifted back onto the racing line into the braking zone, and in doing so clipped his rear right wheel on Sergio Sette Camara’s front left, launching Barnicoat into the air and sent him careering into the back of Nikita Mazepin and catching Harrison Newey in the process.

While Barnicoat retired on the spot, both Mazepin and Newey were able to carry on.?Russell meanwhile?retired into the pits after suffering?gearbox issues and brake failure.

On the restart, both Gunther and Stroll were able to pull a sizeable gap on Eriksson in third place. It then became a battle for first position between the two Prema drivers, with Stroll continuing to catch Gunther, only for Gunther to then pull ahead a?lap after.

The next move came from Sette Camara, who darted down the inside of?Guanyu Zhou into turn three for ninth position on track. This put the Chinese driver all out of shape for the next few corners and?he?was passed left right and centre before falling well outside the points.

With just under 10 minutes left on the clock, Stroll made an attempt to take Gunther into turn one, but the German saw through his late dive and stuck to the racing line to keep the position.

The fight continued all the way around the lap before Stroll jumped out behind Gunther to take first place into the final chicane. With the pair fighting it out, it allowed Eriksson to catch up somewhat, but he was still too far behind to make an impact.

The final?battle was between the two Red Bull backed drivers for the lower?points paying positions. Sette Camara was able to take Niko Kari coming out of the last corner for eighth, with Pedro Piquet also getting passed Kari down the pit-straight into turn one.

But nothing was going to stop Stroll from winning again, as he pulled out several seconds on?Gunther by the chequered flag to take his ninth?win of the season. Eriksson once again as the highest ranked rookie to take third place overall.

Ralf Aron and Anthoine Hubert?benefitted from the accidents ahead of them to take fourth and fifth positions respectively, with David Beckmann making his way up from 11th to finish in sixth. Ilott recovered from his earlier incident to finish in seventh ahead of Sette Camara, Piquet and Kari in the final points paying positions.