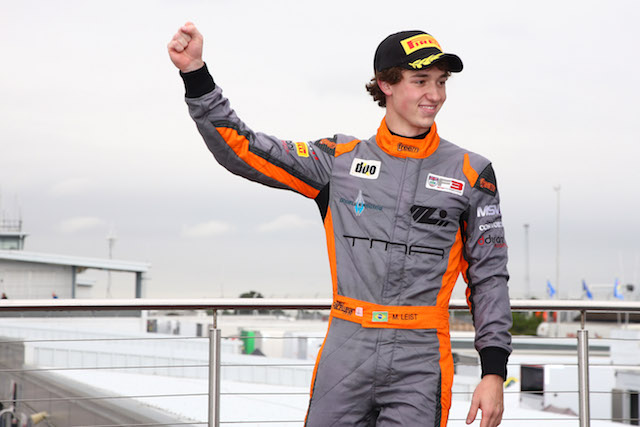 Matheus Leist has taken the BRDC British Formula 3 Championship lead in the deciding round at Donington Park, winning a?first race shortened by a crash that eliminated erstwhile leader?Ricky Collard.

Leist grabbed the lead away from surprise polesitter?Ben Hingeley?at the Melbourne hairpin on the first lap, and stayed ahead under pressure from?Harrison Scott?prior to a mid-race safety car period.

Later in the race, Leist actually lost the lead to Scott, but the red flag came out moments later to end the race, with Leist having led at the end of the final completed lap.

That red flag came with the cars of Collard and Enzo Bortoleto in the gravel at the first corner with only?a few minutes left on the clock.

Collard had dropped to 14th on the opening tour after contact from Enaam Ahmed, but?had fought his way back to sixth place before his?bid to take fifth away from Bortoleto?ended in disaster.

That marked an early end to the race, and although no further laps were completed after their crash, under the regulations both Collard and Bortoleto were not classified as finishers having not been running at the stoppage.

With Collard not scoring points, his 15-point lead coming into the weekend becomes a 20-point deficit with two races remaining, and he will have to start race two from last on the grid after being found at fault for the crash and being given a five-place grid penalty. Ahmed recieved a similar penalty for the first-lap clash.

Thomas Randle‘s slim title chances ended when he suffered front-end damage in the early stages against the rear of?Toby Sowery, who is also now out of mathematical contention. 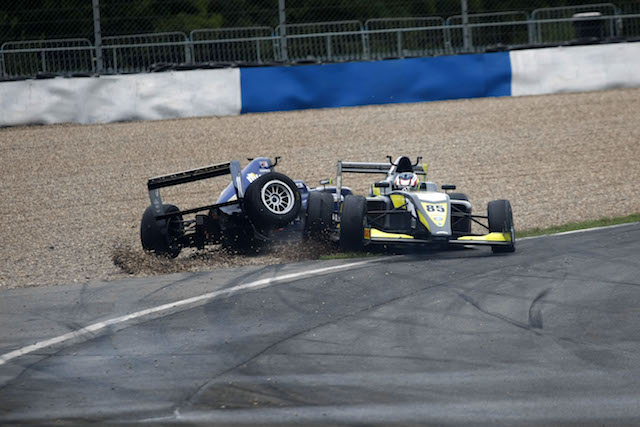 Gunther gets victory in final European F3 race at the Nurburgring