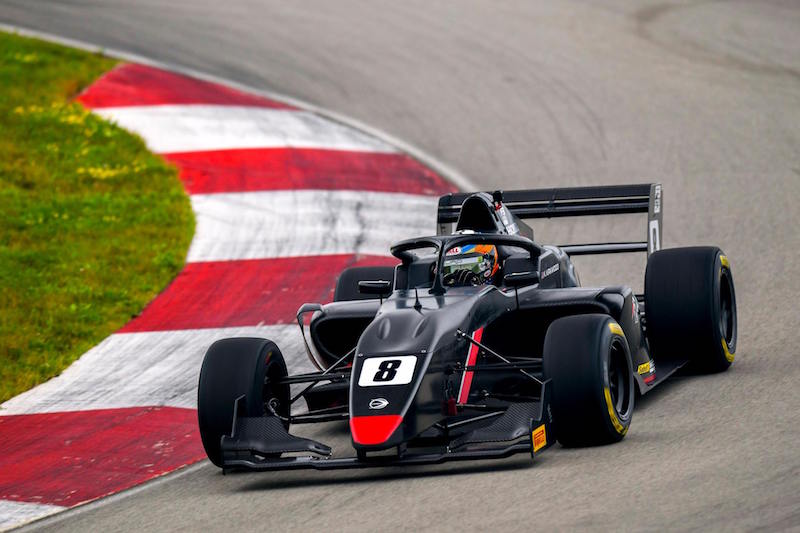 Kirkwood, winner of last year’s US Formula 4 series and the recently-crowned USF2000 champion, was one of just four drivers participating in the first round of the new FIA regional F3 series at Pittsburgh International Race Complex, and leaves the track with a 21 points advantage over Argentinian racer Baltazar Leguizamon.

Leguizamon earned the honour of being the first man to take pole position in the championship and, after a strong start, the first man to lead a race, but Kirkwood was on his tail. The pair ran nose to tail for a number of laps before a mistake as he tried to overtake sent Abel Motorsport driver Kirkwood wide.

Kirkwood managed to return to the track, though he?d lost four seconds to the race leader. Undeterred, he quickly closed the gap and, midway through the race, claimed the lead after running side by side with Leguizamon at turn four.

The pair continued to run together to the chequered flag, but the pole sitter never got an opportunity to reclaim the position and had to settle for second.

John Paul Southern Jnr completed the podium after Peter Portante stalled at the start of the race. Portante put in a series of flying laps to try to close the gap to his competitors, but he still finished half a minute behind Southern.

After a strong start, he quickly pulled away from the rest of the field as Southern and Leguizamnon battled for the runner up position. Southern had started ahead, though Leguizamon managed to pick up the position on the opening lap. The pair continued to run together until Southern was forced to come into the pits, where he retired.

Once he was free from Southern, Leguizamon set about closing the gap to Kirkwood, but the chequered flag came out before he could put a serious dent into Kirkwood?s lead. He finished 13.138s behind the race one winner, while Portante finished a further four laps back to take his first podium of the weekend.

The Florida-born driver continued his domination in race three, where he started from pole and was unchallenged throughout the race. By the mid point, he had a five second gap back to Leguizamon. This time, the Global Racing Group couldn?t close the gap and Kirkwood continued to pull away from the rest of the field, eventually finishing almost 15 seconds ahead of the rest of the field.

Leguizamon took a hat-trick of second place finishes, while Southern took third ahead of Portante.

F4 frontrunner Benjamin Pedersen had been part of an original five-car entry, but after testing the Onroak-Honda F3 car he opted to focus on his F4 campaign this weekend, while pledging to return to F3 for future rounds.