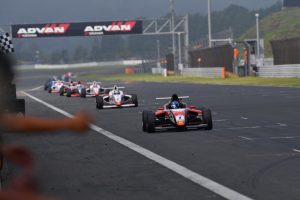 Kazuto Kotaka is now firmly in contention for the Japanese Formula 4 title after winning both races at Fuji.

The TOM’S driver missed the opening round of the season at Okayama, but has been on the podium in every race since and took his first two wins last weekend.

He was beaten to both poles by Honda Formula Dream Project’s Teppei Natori, with qualifying taking place in baking conditions. Kotaka was second fastest in both sessions, with OTG driver Togo Suganami leading Natori’s HFDP team-mate Yuki Tsunoda on both occasions.

Kotaka took the lead off the line at the start of the first race, but was unable to break the tow to those behind for several laps. Eventually their battling did allow Kotaka to break away, and he pulled out a four second lead to take his first victory.

The battle for second went right to the wire, with championship leader Tsunoda taking second from Natori on the final lap. Kotaka’s team-mate Sota Ogawa was just behind, with three split by just over a third of a second as they crossed the line.

Kohta Kawaai had a similarly close challenge for fifth, but was quick enough on the final lap to put almost a second between himself and Suganami.

Temperatures cooled for the second race, and this time Natori held off Kotaka into the first corner. The battles were even closer at the front this time round, and mistakes meant that the order behind the top two changed frequently.

In the middle of the race it became a three-way battle for the lead, with Natori somehow holding on to the lead despite receiving damage to his front wing during one of the skirmishes.

With two laps to go Kotaka finally pounced on Natori, passing him down the pit straight. Natori slipped back but held on to second.

Bionic Jack Racing’s Mizuki Ishizaka looked set for third until colliding with Tsunoda on the final lap. Neither were penalised, although Tsunoda came home with third and Ishizaka failed to meet the chequered flag.

Their incident allowed Suganami to latch onto the back of Tsunoda at the flag, while Ogawa got another top five finish.

Crosslink Racing with Kiwi Motorsport were in control in the United States F4 round at Pittsburgh, winning all three races.

Jose Blanco-Chock took pole and a second victory of the season in the opening encounter, holding off team-mate Austin Kaszuba.

Championship leader Dakota Dickerson was one of 12 drivers to receive a grid penalty, and rose from 12th on the grid to finish sixth.

The aptly named Car was the man to beat in the second and third races, taking both wins and climbing to fifth in the standings.

DEForce Racing’s James Raven was his closest rival in the first race, with fellow Briton Teddy Wilson taking third for JHMDD. Dickerson and Kaszuba were fourth and fifth.

Rasmussen and Pedersen were both hit with penalties for causing collisions, although we were out of the points anyway.

Raven and Dickerson were best of the rest. Dickerson’s championship lead now stands at 19 points over Pedersen, who finished the race in seventh. Rasmussen is a further 16 points behind, and finished two places behind Pedersen in the race.