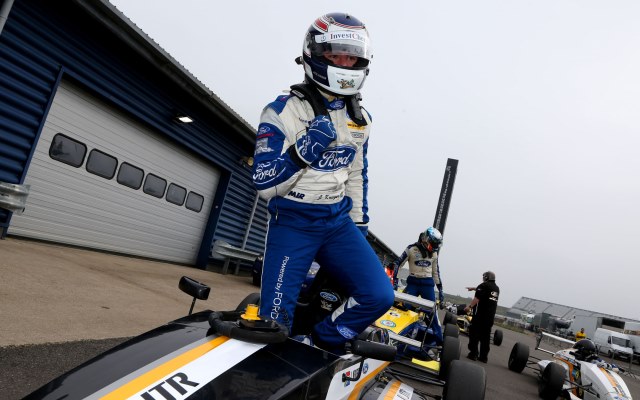 Jayde Kruger has tied with Harrison Scott for the lead of the Formula Ford GB standings after winning the opening race of the weekend at Rockingham.

From pole position, Kruger held off race-long pressure from Ashley Sutton, taking the chequered flag with a 0.998 second lead to claim his third straight victory.

Scott was ten seconds back in third place, having passed Falcon team-mate Ricky Collard on lap four after the rookie made contact with Sutton on the opening tour and suffered a broken front wing.

Collard would fall back to fifth on lap eight, behind Max Marshall. Collard lost a further place to Michael O’Brien on the penultimate lap, but the MBM driver would fail to finish after a last lap incident that also eliminated JTR debutant Clay Mitchell, who had got himself up from 12th to eighth.

With Collard back up to fifth, Louise Richardson came through to sixth. James Abbott beat Chris Mealin to seventh, with Greg Holloway ninth and Juan Rosso the final finisher in tenth, a lap down after a visit to the pits.